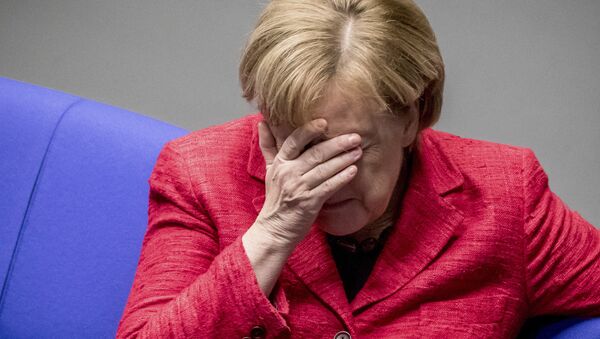 © AP Photo / Michael Kappeler
Subscribe
International
India
Africa
Germany has decided to extend its ban on arms sales to Saudi Arabia for six months. Berlin halted arms deliveries to Riyadh after the killing of journalist Jamal Khashoggi. The weapons freeze also bars the sale of arms manufactured outside of Germany if they have German components, prompting criticism from France and Britain.

In response, Berlin agreed to extend the already existing export licenses for nine months and called on Paris and London to ensure that weapons' systems deliveries to Saudi Arabia or the United Arab Emirates (UAE) are not used in the conflict in Yemen.

Sputnik discussed Germany’s decision to extend its ban on arms sales to Saudi Arabia with Peter Schulze, a professor of politics at Georg-August-University in Göttingen, Germany.

Sputnik: Why in your view has Germany decided to extend its ban on arms sale to Saudi Arabia?

Peter Schulze: First of all, there was, of course, very strong opposition against cancelling any of arms [sales] to Saudi Arabia from the Christian Democratic coalition partner. And, of course, there is pressure from the arms industry in Germany, especially from […] but as well from Schleswig-Holstein because thirty patrol boats which are claimed to be shipped to Saudi Arabia are built by a former East-German shipbuilding company in Wolgast and you can imagine that such a big task is very helpful for the local economy. And therefore you’ve has a combination of political and economic pressure to stick to the contracts and to deliver. But, of course, there is another mood within the Social Democratic Party, and this was already visible when the government was formed last year, that export of German arms into conflict areas should be absolutely prohibited and only the already existing contracts should be served. So, this is an ongoing struggle in the coalition government which will not end by the turn of the coalition.

Sputnik: How important really are German arms sales to Riyadh?

Germany's SPD Ready to Allow Some Arms Exports to Saudi Arabia - Reports
Peter Schulze: Riyadh is the second-largest client for German arms sales; Germany exported over €400 million in arms to this country. It is an important market, of course; and it is a very specialised market because, as I mentioned already, the patrol boats built in Schleswig-Holstein and Wolgast are very important for the regional economy, and secondly, [they] are components for the Air Force and for artillery systems and higher technologies components […] over the countryside. And therefore if Germany had cancelled this kind of contract absolutely with Riyadh, it would have backfired on other potential buyers of German arms in the region. The second one, of course, is Algeria; Algeria is number one with €741 million of Germany’s arms exports to this country. And I can imagine that this doesn’t remain only a domestic German issue, but many of the projects in which Germany is a partner with Britain, France, Spain or Italy are now under the supervision and control; and the European Union must come to a decision on how to deal with these current projects in the future.

Sputnik: To what extent is Riyadh dependent on these arms from Germany?

Peter Schulze: Of course, [not] the prices are metric figure here and, of course, contents and quality; I mean, you can buy patrol boats in South Korea and in other countries. I think the German arms industry is much more dependent on Riyadh than Riyadh is dependent on arms deliveries from Germany. Therefore is Germany drops out of this market, then, of course, it will lose the market; and secondly, dropping out will have a spillover effect on other potential partners in the region and elsewhere.

Germany May Extend Ban on Arms Sales to Saudi Arabia Beyond Deadline - Reports
Sputnik: Who is in line to take Germany’s place in terms of supplying to Riyadh? Is there a competitor who would like to get those deals?

Peter Schulze: I don’t think this is the case now, putting the export on a kind of a temporary and very fragile basis up to 30 September and probably to the end of this year; other competitors will step in if Saudi Arabia is going to leave the contract as well. And secondly, the Saudis can, of course, put Germany and the contract relations to trial and ask for damage expenses.

Sputnik: To what extent is the German governing coalition on the same page about this decision to extend the ban? Obviously, there must be some lobby from the arms producers that are concerned, right?

Peter Schulze: As I said initially, there are basically two camps in each party. And normally the Social Democratic Party is very restrictive on arms exports; but, of course, they are close to regional elections and due to the fade of other Social Democratic Party in the election polls – they are down to 15-17 percent which is basically half of the election results for the party – so they are not as solid behind a strict export control policy as they used to be. Some people who are in the party and the leading economists were arguing for a kind of a let’s wait and see extent, only from time to time the export [of] arms guarantees. And the CDU was different; the CDU was always not so strict about arms control; but again, the elections are coming, and then the 2019 regional elections and the European elections at the end of May. The CDU is for lighter and more flexible use of arms control policies but, of course, they are bound by not being portrayed in the public image as a kind of a party who supports war in Yemen which is done by German arms. It would be a very negative image.