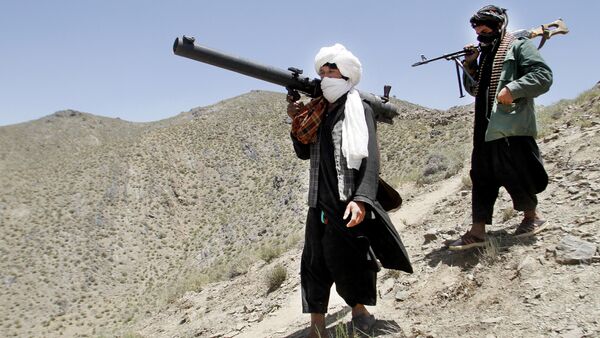 Pakistan is using the Taliban* to influence the situation in Afghanistan “through terrorism and violence”, Afghan vice presidential candidate and former head of intelligence Amrullah Saleh told the Hindustan Times newspaper.

“This is a rotten policy which has widened the gulf of mistrust and it has deprived both countries from enormous economic opportunities which can be utilised if peace and trust prevails”, Saleh pointed out.

Describing Pakistan as the Taliban’s “first home”, he referred to the fact that Taliban leaders engaging in negotiations with the US in Doha fly to the Qatari capital from Karachi or Islamabad.

“Sometimes they are provided with special flights arranged by the Pakistan Air Force”, Saleh said.

He dubbed the Taliban leadership council, commonly known as Quetta Shura, “a network of persons scattered in major Pakistani cities” and used as “headquarters to strategise and coordinate”.

When asked to comment on the Pakistani PM's recent call to form an interim government in Afghanistan, Saleh claimed that Islamabad has repeatedly tried “either to install a puppet clerical regime in Kabul or keep it as weak as possible”.

The goal is “to derail the Afghan constitutional order. Contrary to their rhetoric the Pakistani establishment sees its interest in chaos in Afghanistan. The statement of PM Khan was just an outburst of a covert policy going on for years”, Saleh argued.

He called for “normal, good and friendly relations” between Afghanistan and Pakistan, warning Islamabad not to pursue a policy of the so-called “strategic depth” which Saleh claimed is “truly odd and won’t work” because it relies on “bloodshed, violence, terrorism and blackmail”.

The interview came after Pakistani Prime Minister Imran Khan said on Saturday that an interim government should be installed in Afghanistan to facilitate the Afghan peace process in the run-up to the national elections in the war-torn country scheduled for September 28.

Kabul called Khan’s statement interference in Afghanistan’s internal affairs, adding that it is recalling its ambassador from Pakistan who, however, then returned to Islamabad.

In a separate development earlier this month, US State Department spokesman Robert Palladino touted what he described as a “meaningful progress” in peace talks between the Taliban and Washington.

“The Taliban have agreed that peace will require both sides to fully address four core issues, and they are counterterrorism assurances, troop withdrawal, intra-Afghan dialogue and a comprehensive cease-fire”, Palladino said.

Asia
US May Drop Kabul From Talks With Taliban Over Official’s Criticism – Report
Despite the fact that US troops eventually overthrew the Taliban after it seized power in Afghanistan in 1996, the terrorist organisation remains one of the major forces opposing the Afghan government’s efforts to rein in various rebel and terror groups.

While most US troops left Afghanistan by the end of 2014, American forces continue to be present on the ground to support Kabul in combating terrorism.