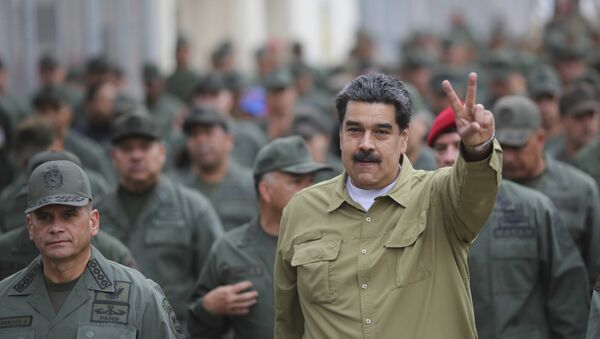 US Special Representative for Venezuela Elliott Abrams has doubled down on assurances that the Maduro "regime" would be toppled once members of his government or the military can be convinced to remove him.

Speaking to CNN's Fareed Zakaria, Abrams was asked to outline how the Venezuelan crisis will end, with Zakaria pointing out that "so far, there hasn't been much military defection," while US sanctions "have only caused the regime to hunker down in a kind of siege mentality."

"Well, first I would say, you know we applied sanctions about two months ago, and some of them were suspended for 90 days or 180 days," Abrams said. "So we are in this at a very early point. And I have been cautioning people both from the diplomatic community and the press [that] it was never our view that this was a four week phenomenon and then Maduro would be gone."

Russia Explains Why Military Specialists Arrived to Venezuela
"This is a struggle against a dictator who is a vicious dictator and who has outside support from Russia and Cuba. So we did not think that this would happen quickly," the official added. "How does it end? It ends when the pressures have mounted to a sufficient degree to convince Maduro and his clique that their time is up, or convince the Venezuelan military that they have got to force Maduro out," Abrams stressed.

Asked whether Russia would indeed be made to "pay a price, from the highest levels of the administration, including the president," over its support for Maduro, Abrams responded that his "very clear understanding" was that it would.

"Everyone knows that the Russians and the Cubans are the main support of this regime, and I see no hesitation on the part of anyone at the top levels of this administration of making them pay a price for it," he noted.

US Thanks India for Efforts to Cut Venezuela Oil Exports
Venezuela's political crisis escalated on January 23, when opposition leader Juan Guaido declared himself the country's "interim president" and was immediately recognised by the US and many of its allies. President Nicolas Maduro slammed the move as an attempt to carry out a foreign-backed coup d'état. Russia, China, Cuba, Bolivia and multiple other countries have voiced support for the Maduro government, and urged outside powers not to meddle in the Latin American country's affairs.

On Sunday, Russian Foreign Minister Sergei Lavrov dismissed recent US threats to make Moscow "pay a price" for its assistance to Caracas, stressing that Russian military assistance, including maintenance of military equipment, was being provided "on an absolutely legitimate and legal basis" and "in accordance with an intergovernmental agreement ratified by the Venezuelan parliament, and absolutely in line with the Venezuelan constitution."