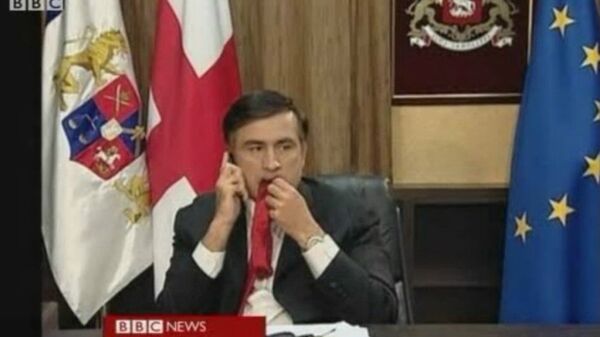 Ilya Tsukanov
All materialsWrite to the author
The former Georgian president, who has been accused of a litany of crimes in his home country, shot to global fame in August 2008 during the military conflict in South Ossetia after he was caught nervously chomping on his tie during a live television broadcast.

Mikheil Saakashvili has finally revealed what prompted him to chew on his tie during his famous 2008 BBC interview.

"I didn't know that I was on the air. When a person is left to himself, especially in a situation like the one you have described, he is capable of anything," the politician said, speaking to Ukrainian media.

Saakashvili admitted that he had acquired a taste for ties from his days at the Artek Pioneer camp during his youth in the Soviet Union. "At that time already I was partial to ties. Therefore, as you can see, I don't really wear them," he quipped.

Getting serious, Saakashvili admitted that the thought of Russian troops coming into Georgia and overthrowing his government and killing him during the 2008 war led him to "just lose control" before the interview.

Five-Day War: Analyst on US Role in Georgia's 2008 Invasion of South Ossetia
Whatever caused the incident, the Saakashvili tie gag quickly became one of the most memorable moments of his presidency.

On 8 August 2008, Saakashvili authorised a massive artillery attack against the breakaway region of South Ossetia. The attack left much of the region's capital city Tskhinvali in ruins, and resulted in the death of several Russian peacekeepers who had been stationed in the area since 1992 to enforce a ceasefire agreement. In order to defend the residents of South Ossetia, many of whom had Russian citizenship, Russia moved troops into the area and ousted the Georgian military from the region after five days of hostilities. After the war, Russia recognised the sovereignty of South Ossetia and Abkhazia, another breakaway republic within Georgia, prompting Tbilisi to sever diplomatic relations with Moscow.

Georgia's Saakashvili Urges Poroshenko to 'Find Good Lawyer' for 'Treason Trial'
Saakashvili's reminiscing led to a renewal of mockery and jokes on Russian-language social media, with users pointing out that ordinary people don't eat ties "even when left to themselves", and noting that the politician had reminded them why he was their favourite "political clown".

"Let him write his memoirs on this subject," one user wrote. "Maybe it was worth trying – what if the tie was yummy? With sour cream, mmmm," another quipped.

Saakashvili fled Georgia in 2013, after his term in office expired. He was accused of exceeding his constitutional authority and embezzling millions of dollars in funds from the state budget, and was also accused by prosecutors of sanctioning the murder of Georgian billionaire Badri Patarkatsishvili in the UK in 2008. In June 2018, the Tbilisi City Court sentenced the politician in absentia to six years on abuse of power charges, adding to a three year conviction for trying to cover up evidence about the killing of Georgian banker Sandro Girgvliani.