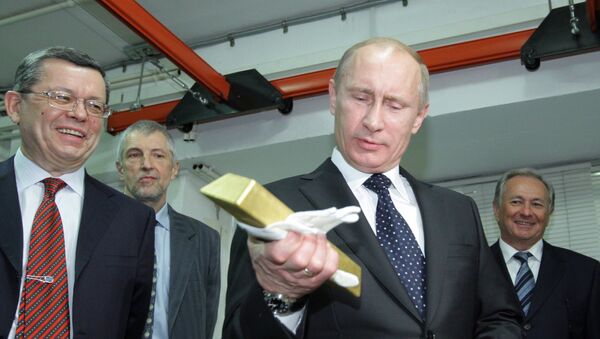 © Sputnik / Alexei Druzhinin
/
Go to the photo bank
Subscribe
Moscow's sovereign gold stockpile jumped up to over 2,100 metric tonnes last year, with the country's status as a major gold producer allowing for reserves to be built up using domestically sourced bullion.

Gold Russian': Why Moscow's Bullion Reserves Continue to Set Records
For Russia, Bloomberg suggested, the gold stockpile means safety "against geopolitical shocks and the threat of tougher US sanctions as relations between the two powers continue to deteriorate." However, with Russian gold mines' output topping out at about 300 tonnes per year, and the Central Bank buying up nearly 275 tonnes of that in 2018, Russia is on-course to making substantial purchases abroad, according to observers.

Bank of Russia Cashes in as Price of Its Recently Stockpiled Gold Skyrockets
And that strategy has already brought dividends, according to experts. Last month, economists estimated that the Russian Central Bank has already earned somewhere in the neighbourhood of $10 billion dollars thanks to rising prices for its gold holdings. Economist added, however, that the rising dollar value of the gold was just a bonus, since the Central Bank's main purpose was to diversify reserves and insure them against the threat of Western sanctions.
Newsfeed
0
New firstOld first
loader
LIVE
Заголовок открываемого материала
Access to the chat has been blocked for violating the rules . You will be able to participate again through:∞. If you do not agree with the blocking, please use the feedback form
The discussion is closed. You can participate in the discussion within 24 hours after the publication of the article.
To participate in the discussion
log in or register
loader
Chats
Заголовок открываемого материала
Worldwide
InternationalEnglishEnglishMundoEspañolSpanish
Europe
DeutschlandDeutschGermanFranceFrançaisFrenchΕλλάδαΕλληνικάGreekItaliaItalianoItalianČeská republikaČeštinaCzechPolskaPolskiPolishСрбиjаСрпскиSerbianLatvijaLatviešuLatvianLietuvaLietuviųLithuanianMoldovaMoldoveneascăMoldavianБеларусьБеларускiBelarusian
Transcaucasia
ԱրմենիաՀայերենArmenianАҧсныАҧсышәалаAbkhazХуссар ИрыстонИронауОssetianსაქართველოქართულიGeorgianAzərbaycanАzərbaycancaAzerbaijani
Middle East
Sputnik عربيArabicArabicTürkiyeTürkçeTurkishSputnik ایرانPersianPersianSputnik افغانستانDariDari
Central Asia
ҚазақстанҚазақ тіліKazakhКыргызстанКыргызчаKyrgyzOʻzbekistonЎзбекчаUzbekТоҷикистонТоҷикӣTajik
East & Southeast Asia
Việt NamTiếng ViệtVietnamese日本日本語Japanese中国中文Chinese
South America
BrasilPortuguêsPortuguese