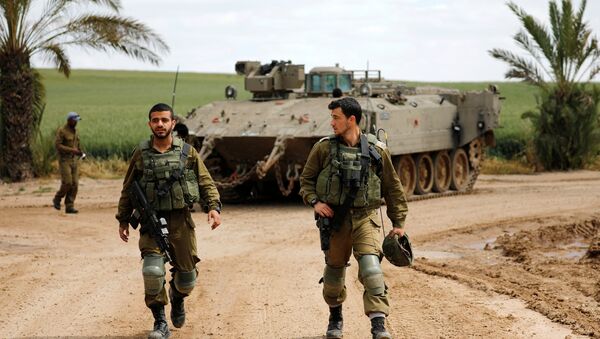 MOSCOW (Sputnik) - A Palestinian man died from a head wound received during border clashes on Friday between residents of the Gaza Strip and the Israeli military, Palestinian media reported citing the PA Health Ministry.

According to Safa Palestinian Press Agency, the man, 20 received a shrapnel wound in eastern Gaza during protests. He was transferred to a hospital, but doctors failed to save his life.

During Friday's rallies, 10 Palestinians received bullet wounds from Israeli forces, the media outlet claimed, while Israeli officials have yet to comment on the situation at the border.

Netanyahu Orders to 'Beef Up' Israeli Troops at Gaza Strip Amid Escalation
The tensions on the Gaza border escalated earlier this week as a rocket fired from Gaza destroyed a house and injured seven people in a densely populated Israeli neighborhood, prompting the return fire by the Israeli military on Hamas targets, located in the border areas of the Palestinian enclave. The exchange of fire resumed on Wednesday after a brief hiatus on Tuesday.

The organizers of the Palestinian protests dubbed the Great March of Return announced on Thursday that they plan to mark the first anniversary of regular anti-Israeli protests along the borders of the Gaza Strip on Saturday with large-scale rallies.

The Israeli military reported that they had completed preparations for the Saturday events, reinforcing the southern district with three additional infantry brigades, divisional headquarters and an artillery unit. Israeli Prime Minister Benjamin Netanyahu visited troops concentrated around the Gaza Strip on Thursday. At the end of the trip, he assured that he would not hesitate to launch a large-scale military campaign, if other means did not work.

The protests have been ongoing since March 30 last year. Each week, at least thousands of people from the enclave gather at the border of the Gaza Strip and the tensions often escalate into clashes with Israeli troops. According to the organizers, over 250 Palestinian protesters were killed in clashes during the year, about 20,000 were injured, more than 15,000 of them were hospitalized. On March 30, Palestinians celebrate Earth Day in memory of the six Arabs who were killed in 1976 during protests against the expropriation of land by the Israelis.