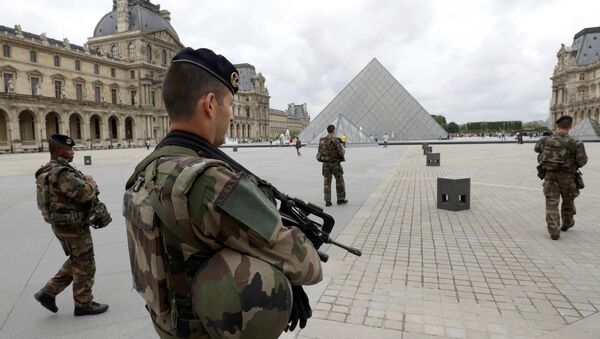 © REUTERS / Philippe Wojazer/File photo
Subscribe
International
India
Africa
PARIS (Sputnik) - Over 60 percent of French people support the creation of a European army, according to a survey released on Saturday by French pollster Odoxa.

According to the poll, 62 percent of the people who voted supported the idea for the creation of a European army.

Sixty percent of respondents said that they doubted that such an army would be created in the next 10-15 years.

France's biggest foreign threat, according to the poll, came from Russia, with 35 percent of respondents saying so. Next was Syria with 29 percent, North Korea with 28 percent, China with 21 percent, the United States with 20 percent and Iraq with 16 percent.

READ MORE: There is No Need to Create EU Army — Swedish Defence Minister

EU Needs Army Not to Be ‘Ball’ Played Between China, US, Russia - CDU Chair
The poll was conducted on 13-14 March among 1,004 adults and has a 2.5 percent margin of error.

French President Emmanuel Macron voiced an idea on the creation of an all-European army for EU member states that could provide the bloc with protection against the United States, China and Russia in November. German Chancellor Angela Merkel has supported the idea, while EU foreign policy chief Federica Mogherini has said that the European Union opposed it.