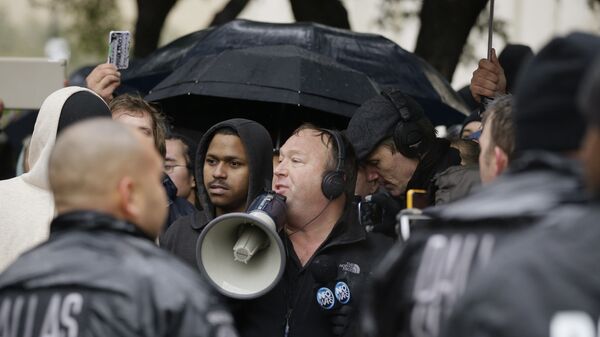 The conspiracy theorist says that the mass shooting which took place in December 2012 and took the lives of 20 children and several school staff members was staged. He has been sued by family members of victims over his claims.

InfoWars host and widely known conspiracy theorist Alex Jones was deposed earlier this month as a part of a lawsuit filed by several family members of Sandy Hook Elementary School children, and he had trouble remembering a lot of things.

Previously, Jones actively promoted the idea that the 2012 Sandy Hook mass shooting was a hoax and never actually happened. Needless to say, grieving parents have sued him for intentionally causing emotional damage.

According to the deposition video, Jones had a hard time defending his position. Talking to plaintiff lawyer Mark Bankston, he at least once he claimed he didn't prepare for the deposition and does not remember what he said about Sandy Hook back in the day.

"I talk four hours a day, and I can't remember what I talked about sometimes a week ago. Sandy Hook has been, in the aggregate, less than one-tenth of 1 percent of what I cover. And I understand that you've been living this and poring over it constantly. I have done almost no preparation for this," he said.

It also turned out he didn't remember the date of the mass shooting.

Connecticut Supreme Court Agrees to Hear Sandy Hook Families’ Gun Appeal
Further along in the video, Jones continued to defend his position that the entire incident was staged. He cited an alleged email from Michael Bloomberg to the media prior to the shooting, saying, "Get ready. There's going to be a big event."

"And just the way the media made a spectacle out of it right away is what really made me question. That scene like with the WMDs or babies in the incubators, I just saw the media so on it, so ready; and I thought that added credibility to it," Jones said.

At the same time, Jones said he previously had a "form of psychosis" which made him think "everything was staged," which he blamed on the "trauma" inflicted by "media and corporations lying so much."

"And I, myself, have almost had like a form of psychosis back in the past where I basically thought everything was staged, even though I'm now learning a lot of times things aren't staged. So I think, as a pundit, someone giving an opinion, that, you know, my opinions have been wrong; but they were never wrong consciously to hurt people," he said.

Sandy Hook Families Seek to Prevent New Massacres With Heart-Wrenching VIDEOs
In the conclusion of the video, Jones denies responsibility for his speech, saying he was "questioning what others were questioning."

"Well, I was stating that I was reporting on the general questioning when others were questioning. And, you know, it's painful that we have to question big public events. I think that's an essential part of the First Amendment in America. And I do not take responsibility for the entire train of things that lawyers and the media have said I've done. So I do not take the responsibility. I do not take your indictment or your presumed conviction of me as the villain or the star of ‘Homeland,' because that's not who I am. And so I reject it," he said.

During the Sandy Hook shooting, which took place 14 December 2012, 20-year-old Adam Lanza fatally shot 20 children between the ages of six and seven years old, as well as six adult staff members. Before attacking the school, Lanza killed his mother at their home. When first responders arrived at the school, they found Lanza had committed suicide by shooting himself in the head.