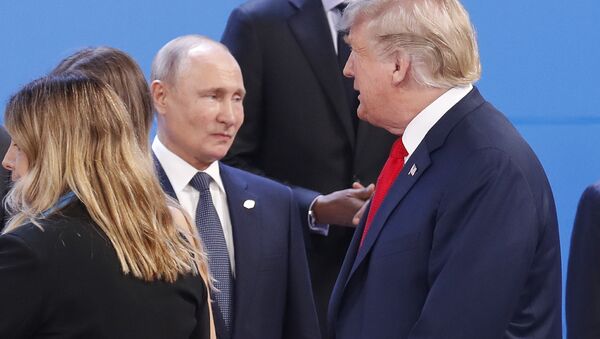 © AP Photo / Pablo Martinez Monsivais
Subscribe
International
India
Africa
US President Donald Trump said Friday that he would probably be talking to Russian President Vladimir Putin at some point about the political crisis in Venezuela.

"We will probably be talking at some point", Trump told reporters when asked if he plans to discuss the situation in Venezuela with the Russian president.

Earlier on Friday, Kremlin spokesman Dmitry Peskov said that Russian President Vladimir Putin and the country's Security Council expressed have expressed concern over the intentions expressed by a number of foreign states to continue intervening in Venezuela's domestic affairs.

Only the Venezuelans themselves should make decisions about the further fate of their state, Peskov stressed.

'Russians Will Pay a Price': US Mulls Response to Moscow Over Venezuela
In January, US-backed opposition leader Juan Guaido illegally declared himself interim president of Venezuela after disputing President Nicolas Maduro’s re-election in May. Washington immediately endorsed Guaido, called on Maduro to step down, and seized billions of dollars’ worth of Venezuela’s oil assets.

Maduro has accused the United States of attempts to orchestrate a coup in order to install Guaido as a puppet leader beholden to Washington. Russia, China, Cuba, Bolivia, Turkey and a number of other countries have voiced their support for constitutionally elected Maduro as the only legitimate president of Venezuela.

No Additional Sanctions on North Korea

Meanwhile, Trump also commented on Friday on the denuclearization process of the Korean Peninsula. In particular, the US president said that Pyongyang is already "suffering greatly", stressing that it was very important to maintain a good relationship with North Korean leader Kim Jon-un.

"We [Trump and Kim Jong-un] get along very well, we have a very good understanding, so I didn't think those sanctions were necessary", Trump said.

Last week, Trump said in a statement that he had ordered the withdrawal of additional large-scale US sanctions against North Korea the Treasury Department had tried to impose.

Asia
North Korea Suffers ‘Artificial’ Earthquake Tremor Due to ‘Explosion’ – Reports
The situation on the Korean Peninsula improved last year with North Korean leader and South Korean President Moon Jae-in having held several meetings. Kim has also held two meetings with Trump, with the parties having reached an agreement in June, stipulating that North Korea would make efforts to promote complete denuclearization of the peninsula in exchange for US-South Korean military drills' freeze and a potential removal of US sanctions.

Pyongyang promised to dismantle the Sohae Satellite Launching Station at Tongchang-ri and the Yongbyon nuclear center. According to  media reports, North Korea, however, continues its activities at the two sites.