#ReadySetNo: British MPs Spell Out Their Intentions Ahead of Brexit Vote 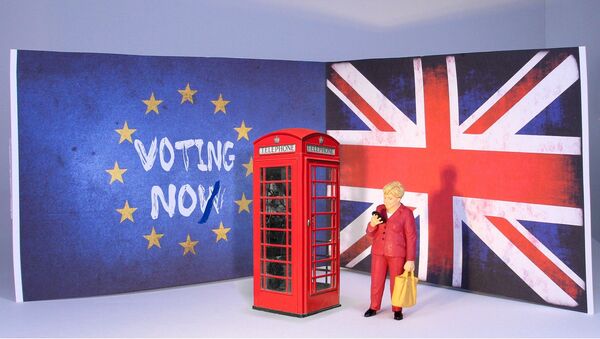 The UK Parliament will have "the last chance we have to vote for Brexit as we understood it" on Friday, as described by the Trade Minister Liam Fox.

29 March was meant to mark the monumental occasion in British political history — its exit from the European Union, but instead the UK Parliament will have to vote on a twice-rejected Brexit deal.

The Parliament's inability to consent in a unanimous vision for the country's future and relationship with the EU has become a matter of frustration for Brussels, Downing Street and the British public alike.

Ahead of Friday's vote, a number of MPs — who previously opposed Theresa May's deal — have switched to back it, faced by the prospect of a no-deal Brexit. One of the most noticeable flops was by Eurosceptic Conservative MP a likely contender to replace May, Boris Johnson.

I have been and remain intensely critical of the deal. But we have a choice to make now, and that means choosing between options that actually exist. I have come to the sad conclusion that neither this government nor this parliament is willing to leave with no deal

It is very painful to vote for this deal. But I hope we can now work together to remedy its defects, avoid the backstop trap and strive to deliver the Brexit people voted for

Lawmakers outlined their voting intentions via their social media accounts, ahead of the 13.00 GMT session in the House of Commons.

Everyone who genuinely wants to honour the 2016 referendum result should think about this and vote for the Withdrawal Agreement.

The vote today is for the blindest of blindfold Brexits.

Unless MPs across Parliament take a stand this afternoon, Brexit is going to be decided by the outcome of the next Tory leadership contest. pic.twitter.com/SjkMMOt1KK

I appeal to all Labour MPs to vote against the motion. Do not usher in a right wing Tory PM who will deliver a hard Brexit which will be the consequence of this. Do not be the midwife of a Tory Brexit. https://t.co/T09vWLPQuT

The Attorney General today talked about "Certainty for business" —
He must know that further economic damage can only be prevented and that "certainty" given by #RevokeArticle50 — maintaining what is familiar and beneficial.
Rest a #Brexit gamble..

I ll be honest, I haven’t been this nervous since being elected — even Most Labour MPs I have spoken to have little against the Withdrawal Agreement. The WA provides certainty, protections & lets us move forward — let’s pass the motion today. @ScotTories pic.twitter.com/2INrN9Vmln

Today all colleagues have the chance to unlock latent business investment and consumer confidence.

The chance to take a decisive step towards stability.

The chance to bring the country back together.

A bright future is within our grasp. #BackTheDeal

I'll be voting against the WA today as it provides no certainty about our future relationship with Europe. Never forget that the real architects of this mess are the politicians who campaigned for Leave and left Parliament to square the circle on their impossible promises. pic.twitter.com/XdkGuBtzg0

We had the whole bloody loaf Jacob! Then you and your ilk gave it away!

MPs will voice their view on the 585-page Withdrawal Agreement but not a shorter declaration on future UK-EU ties. The alteration to the presented documents was prompted by a ban against asking lawmakers the same question over and over again.

A lot of people have been asking whether the vote at 2.30pm today is #MeaningfulVote3 or #MV3.