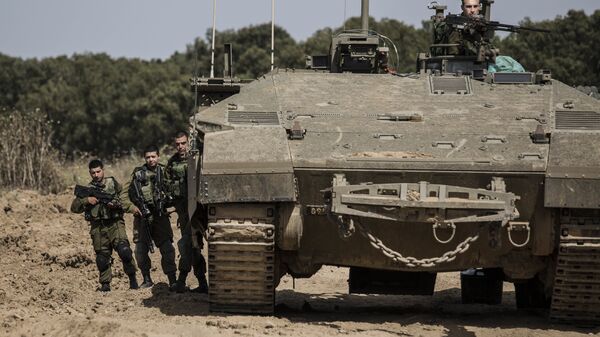 MOSCOW (Sputnik) - Avichai Adraee, the Israel Defence Forces’ spokesman to the Arab press, said that an Israeli tank had shelled a target of the Palestinian movement Hamas in the north of the Gaza Strip amid heightening tensions in the area.

"The tank has shelled a military target belonging to the Hamas terrorist organization in the north of Gaza in response to improvised explosive devices thrown [from the Palestinian side of the border] on the security barrier", Adraee wrote on Twitter.

The tensions on the Gaza border escalated earlier this week as a rocket fired from Gaza destroyed a house and injured seven people in a densely populated Israeli neighborhood, prompting the return fire by the Israeli military on Hamas targets, located in the border areas of the Palestinian enclave. The exchange of fire resumed on Wednesday after a brief hiatus on Tuesday.

Notably, the crisis in underway two weeks ahead of the Israeli parliamentary elections, in which Israeli Prime Minister Benjamin Netanyahu, a sharp critic of Hamas, seeks to secure re-election.

Moreover, the organizers of the Palestinian protests dubbed the Great March of Return announced on Thursday that they plan to mark the first anniversary of regular anti-Israeli protests along the borders of the Gaza Strip on 30 March with large-scale rallies.

In particular, the Israeli military reported that they had completed preparations for the Saturday events, reinforcing the southern district with three additional infantry brigades, divisional headquarters and an artillery unit. Israeli Prime Minister Benjamin Netanyahu visited troops concentrated around the Gaza Strip on Thursday. At the end of the trip, Netanyahu assured that he would not hesitate to launch a large-scale military campaign if other means did not work.