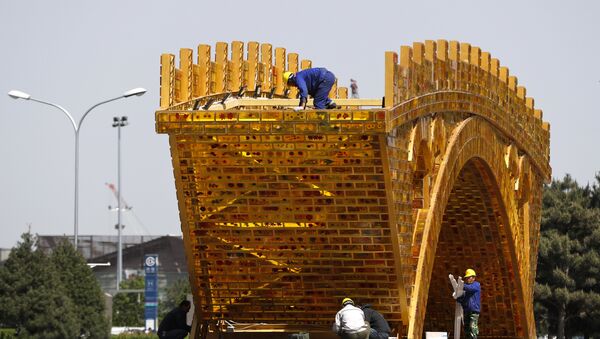 "With its decision to join China's One Belt and One Road (OBOR) project, Italy aims at making up several years of lost economic opportunities", says Daniele Pozzati, a Munich-based Italian journalist and economic observer.

On 23 March, China and Italy signed a memorandum of understanding in support of Beijing's New Silk Road initiative that aims to link Asia to Africa and Europe.

When asked why Chinese President Xi Jinping decided to turn to Rome in the first place, the journalist suggested that in the eyes of China, the Italian port city of Venice plays a strategic role for Beijing's plan, being nothing short of a "gateway to Europe".

"The Italian online magazine Corriere Asia has calculated that the 8,630-mile long Venice-Shanghai route is 2,370 miles shorter than the 11,000-mile long Hamburg-Shanghai route — and that's the equivalent of a 8-day saving in navigation time. The logistical benefit for China is obvious", Pozzati stressed.

Italy's Belt and Road Deal Sparks EU Concerns Over Future Relationship
According to the journalist, this is why Beijing wanted to involve Italy in OBOR in the first place.

However, when it comes to mutual trade, Italy lags behind Beijing's other European partners, Pozzati admitted.

"A few figures will illustrate this, and the need for Italy to catch up: Germany's exports to China in 2018 amounted to €95 billion. This is almost five times as much as Italy's. France's recent Airbus deal with China is worth €30 billion, roughly the size of the entire volume of Italy-China bilateral trade in 2018. Even Switzerland's exports to China are twice as much as Italy", the journalist pointed out.

Citing Michele Geraci, Italy's Undersecretary of State for Economic Development, the observer noted that the country was underperforming even in the food and beverage sector: "A few years ago, Italy's food exports to China were lagging behind those of Ireland and the Netherlands — as well as France, which also has a 36 percent share of China's wine market, as opposed to Italy's 7 percent", he said.

"Besides increasing its exports to China, Rome aims at attracting Chinese investments in Italy, particularly those that the Italian government calls 'greenfield investments' — i.e. foreign investments that create hitherto non-existent economic activities, for example, a 5G Network", the journalist noted.

But that is not all, Pozzati said. According to the observer, "the New Silk Road is an historical opportunity for Italy's seaports, especially Venice, to regain a long-lost centrality in the world's maritime trade routes".

"Venice, Trieste, Genoa, and Naples might all benefit greatly from the New Silk Road, after decades of marginality", he elaborated. "Genoa, Italy's busiest port has never been a match for the North Sea ports of Rotterdam, Antwerp, Hamburg. Naples's seaport is even less busy. Venice and Trieste lost their centrality centuries ago".

According to the journalist, the Italian government is clearly demonstrating an "Italy first" approach: "What the Italians call 'the New Silk Road' should enable Rome to foster its business interests with China more autonomously,  without waiting for an unlikely EU coordination or whatever from Brussels", Pozzati explained.

Meanwhile, the US has clearly signalled its dissatisfaction with Italy's move. On 10 March a spokesman for the White House's National Security Council, Garrett Marquis, warned Rome against joining the Belt and Road Initiative.

"Italy is a major global economy and great investment destination. No need for Italian government to lend legitimacy to China's infrastructure vanity project", he tweeted.

Given that previously Giuseppe Conte sought Trump's support in a Rome-Paris row over Libya it appears that now the Italian government may sour relations with Washington.

"Many Italian commentators are worried about that", Pozzati said. "Others are irritated by what they see as predictable, but still unacceptable meddling in Italian affairs. Besides, Italy's deputy PM Matteo Salvini has warned against the geopolitical implications of joining China's OBOR project".

Journo: Berlin Routinely Imposes its Will on EU, Will Do So With Nord Stream 2
At the same time, the observer suggested that "the Trump administration and the Italian government remain natural allies against a Germany-led EU, and a German-run Euro".

For its part, Germany has long been triggering vocal displeasure in the White House because of its firm support of the Russia-led Nord Stream 2 project. In mid-March Mike Pompeo dropped a hint that the US could impose sanctions on the pipeline endeavour. However, Germany has turned a deaf ear to Washington's warnings, continuing to push ahead with the lucrative project.

Does it mean that EU member states are becoming more independent from Washington?

"It is a fact that Trump's 'America First' slogan did alienate many European countries", Pozzati responded. "Trump's withdrawal from the nuclear agreement with Iran… has forced the European countries to go their way. At this stage, we are witnessing a series of occurrences — the Iran deal, Nord Stream 2, China's BRI — that suggests that some European countries are indeed becoming more independent from the US".

Journo on Why German Business Does Not Fear Trump's Sanctions Over Nord Stream 2
The journalist continued that there is yet another "structural problem" — the European Union.

"The EU deprives its member states of an independent foreign policy, but fails to deliver a common foreign policy", he said. "The result is almost inevitable subservience to the only Western country still in possession of a foreign policy — and of the means to implement it: the US".

On 22 March, EU member states voiced their growing concerns with Italy's decision to join China's OBOR. Having named China a "systemic rival", EU officials have called upon the union to develop a strategy to contain what they see as the spread of China's economic and political influence.

Italy Has Joined OBOR, Who's Next?

Commenting on this, Pozzati noted that "actually, it is Italy that has followed the lead of those 13 EU countries that have already signed a memorandum of understanding with China: Bulgaria, Croatia, the Czech Republic, Estonia, Hungary, Greece, Latvia, Lithuania, Malta, Poland, Portugal, Slovakia, and Slovenia".

"True, they are all small countries", he said. "Italy is indeed the first G7 country, and the first major EU economy, to sign. Germany, France, the Netherlands, and the rest of the EU will opt out as long as they benefit from the current state of Europe-China trade relations".

The Italian journalist predicted that "these countries will begin to join China's OBOR project as soon as it becomes apparent that it is turning into a reality they cannot opt-out of any longer".