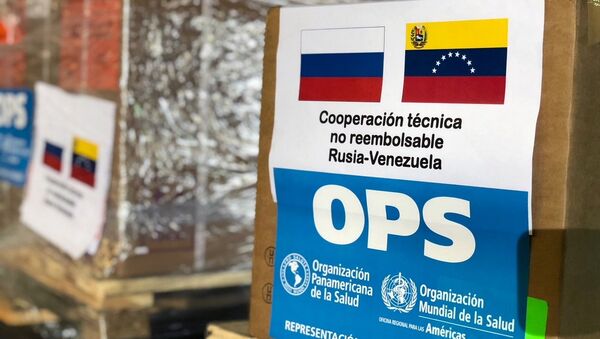 As Venezuela continues to recover from a fourth major blackout Thursday, Caracas has presented evidence that the power loss was a deliberate act of sabotage. Meanwhile, the US, without a hint of irony, demands Russian officials and troops in the country respect Venezuela’s sovereignty and leave.

"The attack was carried out with a rifle from an elevated area," Venezuelan President Nicolas Maduro told the popular Chavista TV program "Con el Mazo Dando" on Wednesday. "We have the bullets and we are working out the caliber and who is responsible… US imperialism is behind this without a doubt."

That attack caused an explosion at the Guri Dam switchyard, a power station that provides for three-quarters of the country's electrical needs.

Paul Dobson, a writer with Venezuelanalysis.com, told Radio Sputnik's Loud and Clear Thursday the blackouts are "having a devastating impact on what was already a weak and fragile economy… we're still yet to see the economic impact, but given that there's been basically no trade, no production, for the last four or five days across the whole country, then obviously this is going to have a negative impact on the economy."

​Meanwhile, Venezuelan Communication Minister Jorge Rodriguez said Thursday during a speech at the Miraflores Palace in Caracas that two days after the latest attack, "we can say that by now the electricity has returned to homes of the overwhelming majority of Venezuelan population, but we should understand that our struggle continues."

Venezuelan Vice President Delcy Rodriguez tweeted photos on Thursday of engineers from a variety of state-run industries working with state electric company Corpoelec to repair the fire damage at the dam.

​In addition, Venezuelanalysis reported that Corpoelec workers across the country were holding assemblies to form and weigh different proposals about how to protect the electric grid from further attacks.

Maduro also announced Thursday that electricity rationing would be introduced, but he did not elaborate further. The country has rationed power in the past when water levels in the Guri Reservoir behind the dam fell too low. The most recent episode was a drought in 2016 that forced the government to schedule blackout times and push private homeowners, businesses and government buildings to take measures to provide for their own electrical needs, Sputnik reported.

While Dobson conceded there was a "well-known reality of a lack of investment in the electrical infrastructure in the country," he also noted that "there's massive historical precedent in this area," and also the fact that these power outages have happened now, while Venezuela is "currently in the grips of an ongoing coup d'etat," was more than simply serendipitous.

"I think it's important the government produce some more concrete evidence to convince" Venezuelans who might not be as knowledgeable about the history of US uses of attacks on power grids during its regime change operations "that this was an act of sabotage," Dobson said.

US President Donald Trump on Wednesday raised alarm at the presence of Russian officials and a small number of troops in Caracas, which flew into the country on two Russian Air Force airliners earlier this week.

"Russia has to get out," Trump told reporters, noting that in dealing with the situation, "all options are open."

Maduro subsequently announced on Russia's Channel One television station that a "high-level working session on intergovernmental cooperation" would be held next month between the two governments, during which they "will sign more than 20 documents on cooperation in the field of economy, trade, energy and education," Sputnik reported.

On Thursday, Jose Rafael Torrealba Perez, the military attache at Venezuela's Moscow embassy, said the specialists were there "talking about cooperation, defense industry cooperation," noting, however, that "in no way are we talking about Russia's military presence to conduct military operations."

Vice President Rodriguez also said earlier this month that Russia and Venezuela were "strategic partners" and that Russian state oil companies Rosneft and Gazprom would be working more closely with PDVSA, Venezuela's state oil company, to enhance the latter's extractive capabilities. Petroleum is Venezuela's primary export, and it's believed to sit atop the largest crude oil reserves in the world. Her comments came at a conference with Russian Foreign Minister Sergei Lavrov announcing PDVSA's European headquarters were moving to Moscow.

Dobson recalled the language used by the US during the Korean and Vietnam Wars, which was remarkably similar to its recent statements, in which Washington postured as getting involved in other countries in the interest of removing another world power, such as the Soviet Union or China.

"It is entirely ironic that the United States, who are trying to impose Their Man, their puppet, in Venezuela, are calling on another world power to leave the country alone," Dobson told hosts Brian Becker and John Kiriakou. "They're effectively, ironically, calling on Venezuela to be sovereign and independent from Russian influence, whilst at the same time and hypocritically trying to impose their puppet on the country. So we can really-see the double-faced nature of the imperialist discourse coming out of the White House at this moment."

"What we're seeing here in Venezuela is an elected government doing an international military treaty with another elected government, and this is perfectly legit. However, going beyond this, it does send a very clear message to the White House that the presence of the Russian high military command was here as a symbolic visit to basically show the the White House that Venezuela is not alone: they have economic backing, but they also have military backing from some very important powers."

"I think this will have the White House a little bit rattled."