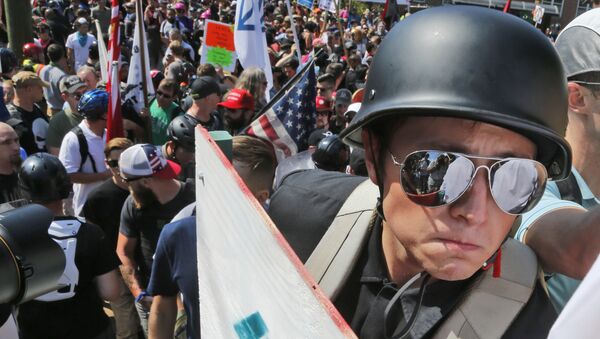 © AP Photo / Steve Helber
Subscribe
Following the revelation last week that numerous US servicemembers belong to the white nationalist group Identity Evropa, the US military is looking into the accused troops and launching a deeper investigation of hate group penetration into its ranks.

Using chat logs leaked from a Discord messaging server by the nonprofit media collective Unicorn Riot, the Huffington Post published an expose on March 18 that named seven US servicemembers as members of Identity Evropa, a white nationalist group that helped plan and participated in the "Unite the Right" rally in Charlottesville, Virginia, in August 2017 that left one woman dead.

The respective service branches have all verified that the named persons are members of their branch and have expanded their probes to look for more hate group members.

However, spokespersons have offered little else. Air Force investigators said they hadn't found any more members of Identity Evropa, but other branches would not make such a statement, nor would they say what actions had been taken against the accused persons.

They did, however, affirm that membership in such a group and adherence to its hateful ideology is inconsistent with the values of their respective US service branches.

"The Marine Corps is investigating the allegations and will take the appropriate disciplinary actions if warranted," Maj. Roger Hollenbeck, a spokesperson for Marine Forces Reserve, told Military.com for a Thursday article. "Because the investigation is ongoing, it would be premature to speculate and further comment on the outcome or the timeline."

"Should an investigation substantiate that any Marine is advocating, advancing, encouraging or participating in supremacist, extremist, or criminal gang doctrine, ideology, or causes, including those that advocate illegal discrimination based on race, creed, color, sex (including gender identity), religion, ethnicity, national origin, or sexual orientation, or those that advocate the use of force, violence, or criminal activity, or otherwise advance efforts to deprive individuals of their civil rights, then they will have violated the Marine Corps Prohibited Activities and Conduct Order," Hollenbeck added.

Anyone in violation of those rules "would be subject to criminal prosecution and/or administrative separation," the Marine said.

"Participation in extremist organizations and activities by Army National Guard personnel is inconsistent with the responsibilities of military service," said National Guard Bureau spokesman Master Sgt. Michael Houk. "It is the policy of the United States Army and the Army National Guard to provide equal opportunity and treatment for all soldiers without regard to race, color, religion, gender, or national origin."

"Identity Evropa started off as an organization called the National Youth Front, and it was an organization by members of a larger group called the American Freedom Party. It's been around since 2014. They've had a number of different leaders, including three military veterans… Another [derivative] group was formed by members of Identity Evropa that is now called the American Identity Movement," Daryle Jenkins, founder of the anti-racist group One People's Project, told Radio Sputnik's By Any Means Necessary last week.

Indeed, there have been numerous exposures of white nationalists and neo-Nazis in the ranks of the US military in the last few years. Prior to last week's report, the most recent was Christopher Paul Hasson, a US Coast Guard lieutenant and self-avowed white nationalist arrested last month and accused of planning terrorist attacks and assassinations of a laundry list of politicos and media figures.

Hate tracking groups the Anti-Defamation League (ADL) and Southern Poverty Law Center (SPLC) have released reports recently tracking the growth of so-called "alt-right" groups and their propaganda work, showing a startling and steady uptick since US President Donald Trump took office in early 2017, although neither trend began with his election.

As Sputnik noted in February when the report was published, the vast majority of hate groups in the US adhere to some kind of white supremacist ideology. These include neo-Nazis and the Ku Klux Klan, but also skinheads, neo-Confederates, white nationalists and groups like the Proud Boys that rhetorically skirt the line by not openly calling themselves such things, but espousing similar ideology nonetheless.

ADL's report noted that white supremacist propaganda efforts increased by 182 percent in 2018 from the previous year, to a total of 1,187 instances, including a sevenfold increase on college campuses. Identity Evropa was one of the most actively propagandizing groups.

Sputnik noted last week that following the publication of their chat logs, Identity Evropa leader Patrick Casey announced the organization would rebrand itself as the American Identity Movement, likely an effort to distance itself from the intensely negative press of the Unite the Right rally and more directly appeal to more mainstream supporters of US President Donald Trump.