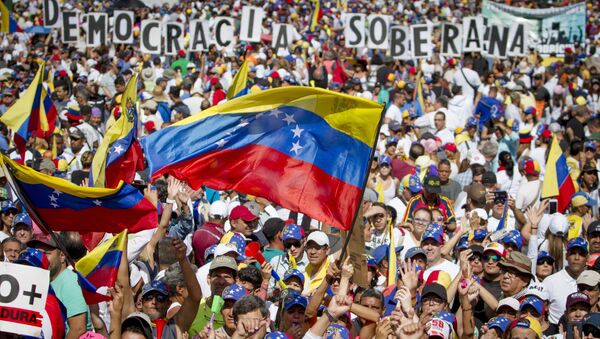 A group of Russian military personnel arrived in the Venezuelan capital Caracas on 23 March to participate in consultations with government officials on bilateral defence industry cooperation as the ongoing political crisis in the Latin American country has heated up.

Israel-based Image Satellite International (ISI) has shared alleged satellite images of the deployment of Russia-made S-300 air defence missiles by the Venezuelan military to the Captain Manuel Rios Airbase in the Guarico state, a key airbase south of Caracas, amid simmering tensions in the region.

ISI also reported that the Venezuelan Armed Forces had put the S-300s into operational readiness after holding military drills in February.

iSi #Intelligence Summary — https://t.co/FWqmIYSdJP#Venezuela: A month of military preparations. Will there be a confrontation?
***#ISI shows a parallel between the beginning of the crisis in Venezuela and the heightened #alert in the #military's #S300 unit.#Satellite #space pic.twitter.com/yoYNVmdnUR

Several days before the dispatch, a number of media outlets reported that an estimated 99 Russian military staff had arrived in Caracas on board two planes, which also delivered 35 tonnes of cargo.

Reacting to the reports, US Vice President Mike Pence told reporters that Washington perceives the arrival of Russian military aircraft in Venezuela as an unwelcomed provocation and called on Moscow to stop supporting the government of Nicolas Maduro and stand with self-proclaimed interim President Juan Guaido.

Caracas Rep Rules Out Russia's Military Conducting Combat Ops in Venezuela
Prior to that, US President Donald Trump had urged Russia to "get out" of Venezuela and stressed that all options were on the table.

Russia has emphasised that Moscow has not violated either international agreements or Venezuela's domestic legislation, and that the deployment was done "within the framework of our normal relations with the legitimate government".

In a parallel development, Guaido announced this week that 6 April will be the first day of "tactical actions" for the so-called "Operation Freedom" — his plan to stage a full-fledged revolution in all states of Venezuela simultaneously.

Venezuela has been mired in an ongoing political crisis for over two months, since opposition figure Juan Guaido proclaimed himself interim president in defiance of Maduro. The move was instantly recognised by the US and some of its regional allies, while Russia, China, Turkey, and many other countries reaffirmed their support for legitimately elected Maduro.

Back in 2009, Russia agreed to lend Venezuela over $2 billion to purchase 92 tanks and an S-300 missile system that can shoot down fighter jets and cruise missiles. Two battalions of S-300VM "Antey-2500" were delivered in May 2012.