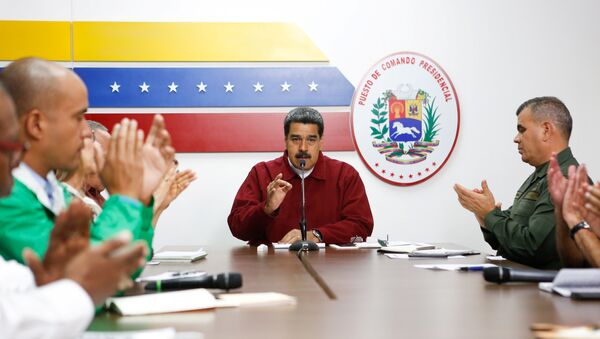 WASHINGTON (Sputnik) - The United States has asked European and other countries to increase the pressure and impose additional sanctions on the Maduro government in Venezuela, US Special Representative for Venezuela Elliott Abrams said on Thursday.

"We have asked governments in Europe and other places to review this question and to impose more sanctions," Abrams said. "In some cases, to look also at visas for representatives of the Maduro regime. And I hope more governments will pursue that line of activity."

However, the US official noted that Washington has never established a timetable for ousting Nicolas Maduro from power in Venezuela.

"No one has a timetable for this… no one can predict exactly when Maduro will be gone and the United States had no timetable," Abrams said.

Abrams pointed out there is no evidence that negotiating with Maduro will be productive, adding that the United States will continue to support the National Assembly and Venezuelan Interim President Juan Guaido for as long as it takes.

The US side has slapped Venezuelan President Nicolas Maduro, as well as some members of his administration, with several rounds of punitive measures, including, among the recent ones, the revocation of the visas of over 250 Venezuelan government officials and their family members for their support for the president.

Another batch of American sanctions is based on banning the purchase of oil from the crisis-torn country: thus, in January, Washington blocked $7 billion in assets belonging to Venezuela's state oil firm PDVSA. Venezuelan President Nicolas Maduro said that the US-imposed restrictions were tantamount to an illegal seizure of assets. In one of US National Security Advisor John Bolton's latest statements, he vowed that the "toughest sanctions against Venezuela are yet to come".