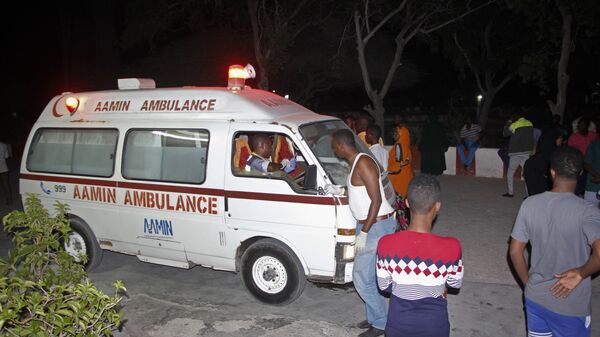 MOSCOW (Sputnik) - An explosives-laden car detonated in the vicinity of the country's parliament in the centre of the Somali capital of Mogadishu, the Garowe Online news website reported.

At least 11 people were killed and 16 others injured on Thursday in an explosion in downtown Mogadishu, Garowe informed, citing medics.

"The death toll we have confirmed so far is 11 people, with 16 others wounded", Abdulkadir Abdirahman Adan, director of the Aamin Ambulance service, stated adding that the toll could still rise. "There could be more losses".

An explosion has just happened in Howlwadaaf distrust, Mogadishu pic.twitter.com/5VWavT4y9a

This is already the second blast in Mogadishu over the past 24 hours, as a remotely controlled landmine blast killed two people and injured several others late on Wednesday.

BREAKING: @AaminAmbulance — Mogadishu's only ambulance services provider- puts the death toll from today's attack at 11. 16 others got wounded. pic.twitter.com/BGlOYxAWsB