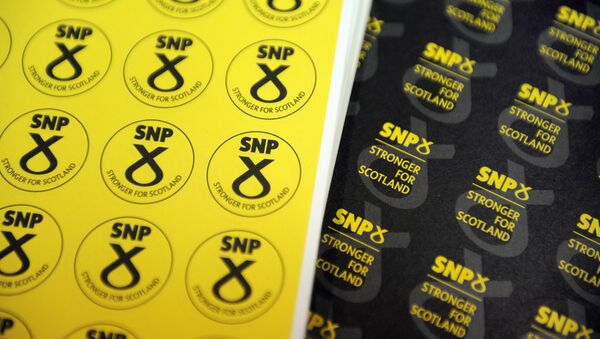 Tommy Sheridan
All materials
I am surely not the only advocate of independence for Scotland who has now reached frustration overload in the continuing shenanigans over Brexit.

I appreciate the SNP is a mainstream social democratic political party which feels obliged to play the Westminster parlour games but whenever I hear the expression 'putting country before party' and 'acting in the national interest' I want to scream. Westminster stands for and represents the British Establishment in all its blood-soaked, hypocritical and privilege defending glory. The UK is not a country. The UK is a voluntary political 'union of nations' which is dominated by the largest member, England. I am not interested in saving that Union in any way, shape or form. I want to dissolve that Union completely and urgently.

I call on the SNP now to shift from exercises in futile diplomacy to the full bloodied war [fight] required to free Scotland from the ever restrictive yoke of England's exploitation under the guise of the Union. The pursuit of Brexit2 was a time and energy wasting rabbit hole without a shred of democratic legitimacy in either England or Wales. Both those countries did not just vote for Brexit in 2016 they subsequently voted for political parties which embraced and promised Brexit at the snap General Election of 2017.

On the back of a Brexit promise, Labour's vote increased by 10%, their largest single election vote increase since 1945. Even though the Tories lost their parliamentary majority their vote percentage also actually increased.

Over 80% of the votes cast at that 2017 General Election were for parties committed to Brexit, committed to implementing the will of the people expressed in the 2016 referendum. How on earth could any of those parties then betray their voters by reversing that firm election commitment within 18 months of securing support on the basis of it?

Democracy is already a battered and bruised concept in the eyes of many of the electorate after years of broken promises, expenses scandals and botched economic management which have guaranteed reduced disposable incomes and public services for the many but grotesque wealth increases for the few. Rubbing salt in those wounds by refusing to honour the Brexit commitment in their respective election manifestos would be a step too far.

The SNP could justify their support for Brexit2 on the back of Scotland's rejection of Brexit1 in the 2016 referendum but it is a weak justification. They did not place a Brexit2 commitment in their 2017 General Election manifesto, unlike the Lib Dems and Greens (both of whom suffered reduced support at that election). They did, however, include a commitment to honour their IndyRef2 manifesto commitment of 2016 which saw them win the Scottish Parliament election of that year. Pursuing support for Brexit2 instead of pursuing vigorously IndyRef2 over this last 12 months has, in my opinion, been a mistake. It has diverted political attention, resources and focus from the democratically underpinned case for independence into the democratically feeble case for Brexit2.

Recently the emphasis of the SNP in the British Parliament switched from Brexit2 to Revoking Article 50 and halting Brexit in its tracks. Again this is a perfectly legitimate position for the SNP to adopt and support given the rejection of Brexit by Scotland but that proposal was dumped by Westminster last night by 293 votes to 184. The Brexit2 idea, dubbed the 'people's vote' by the enthusiastic and predominantly middle-class backers who like to patch the outcome of the 2016 ‘people's vote,' was trounced by 334 to 85 votes a couple of weeks ago. So with the British Parliament mired in chaos and confusion, the Tory party more split than ever and the Labour party handicapped by the continuing disloyalty of the Blairites more committed to stopping Corbyn than dumping the Tories I had hoped to read and hear today that the SNP will now concentrate full tilt on IndyRef2 and get on with naming a date. I was disappointed.

Today's Daily unionist Record carries a big splash from the SNP demanding a new general election. I had rather hoped it would have carried a splash containing the SNP's naming of the date for IndyRef2. Don't get me wrong as a socialist and anti-poverty campaigner I welcome any opportunity to dump the Tories from office. They are a bunch of cold, callous and calculated servants of big business and the rich. They don't give a damn about ordinary workers or the most vulnerable in society. Instead of a re-run of Brexit2 which concerns one major issue I would prefer a new General Election which puts Universal Credit, millionaire tax evasion, re-nationalisation of stolen public services and scores of other major issues to the ‘people' but this has been the position of Corbyn for months and it was a position the SNP attacked him for holding.

So we have had the Brexit2 call, the Revoking Article 50 motion and now we have the new General Election stance. When are we going to get what most independence supporters have been crying out for, the announcement of IndyRef2?

The SNP is the Scottish National Party not the British or UK National Party. Their interests must always be Scotland and that by necessity means pursuing an agenda which is best for Scotland first and foremost, not trying to save England from itself. Brexit provides a major spur for IndyRef2, of that there is no doubt. But it is far from the only spur and justification for IndyRef2.

Since the 2014 independence referendum, there have been two General Elections and one Scottish Parliament election. The SNP with a clear general commitment to pursue independence and a specific IndyRef2 commitment in 2016 and 2017 has won all three of those electoral contests. There is a clear and democratic mandate for Indyref2. The SNP must now seize the unique opportunity afforded by the unionist chaos and division within Westminster and name the date. The convergence of favourable circumstances may never again be so aligned. This is without doubt a unique opportunity.

Questions like EU membership, the role of the Monarchy, what currency to use and in or out of NATO are all important issues to be determined by an independent Scotland but until we secure our independence discussion of them assumes the status of no more than hot air. Only once we are independent will we be able to properly decide our position.

I want out of the EU and a Norway type relationship instead, no more Monarchy, no more NATO and our own currency linked to and controlled by our own national bank. But all of that can be debated after we win the next YES vote. It doesn't have to be decided now and continued debate of such issues prior to a positive YES vote could cause more friction and heat instead of more unity and light.

Last week a ground breaking report from the Office of National Statistics (ONS) was published. It really does present a picture which makes the case for an independent Scotland irresistible. For the first time Scotland's real natural wealth has been assessed and the result is incredible. The ONS research examined the value or profit provided by natural resources — such as wind, water, oil and gas — and how they are used. It concluded that Scotland owns 34% of all of the UK's natural wealth. Despite representing less than 10% of the UK population we in Scotland own more than a third of all of the UK's natural wealth.

Never again will the jibe about being too poor or too small to stand on our own two feet ever be seriously entertained. This new Report confirms without fear of contradiction that we are economically fit and able to stand and prosper as independent Scotland in the world.

Alongside thousands of other independence supporters, I gathered in Glasgow last Sunday to call on the SNP to use the democratic mandate the people of Scotland have given them via the ballot box. The independence movement is of course bigger than any one party or individual but the SNP is the de facto political leadership of the movement and Nicola Sturgeon is more than our First Minister, she is also the embodiment of the independence dream.

The time for the SNP and Nicola to lead on IndyRef2 is now.

They must inform the British Government, not seek permission from them, that a new independence referendum will be held this September and set out the date and rules of that referendum. The landed gentry and small privileged political class gave away our independence in secret in 1707 when they signed up to a voluntary union with England that extinguished our national independence and dignity. We must now in public and with energy and confidence announce our intention to seek the support of the Scottish people to withdraw from that agreement as it is not only contrary to our national interests it is actually detrimental to our future development.

Cameron and the Tories only granted a Section 30 Order promising to recognise the last referendum outcome in 2014 because support for independence at that time was only 25%, according to opinion polls less than 12 months before the 18th September Referendum day. That support grew from that low base to over 50% before falling latterly to 45% on the back of scare stories, BBC coordinated bias, outright lies and the farcical Vow was a remarkable achievement for the YES campaign. Our base now is anything from 45% to 52% and on the back of a short, positive and enthusiastic campaign will rise to nearer 60%.

On behalf of the children and future generations of Scotland we must pose the key questions, if not now — then, when and if not us — then who?

The SNP has to ditch the various dalliances with schemes to save Britain and turn all its vast talents and resources into the much more honourable objective of dissolving Britain.