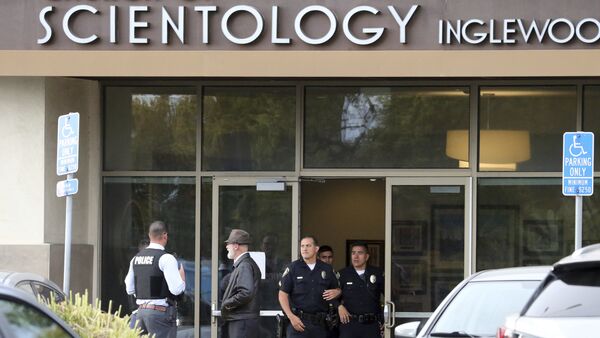 This was the second attack on a Los Angeles Scientology building with the use of a sword in a little over decade. In the last such incident, the assailant was shot dead by security guards.

An unidentified man attacked a Scientology church in Inglewood, near Los Angeles, California, wielding a samurai sword on 27 March, channel KTLA5 reported. After an encounter with two police officers, he was severely injured and taken to hospital, where he died. Both officers also received non-threatening gunshot wounds. None of the church visitors were injured in the incident. It's unclear so far what the man's motives were and whether he had a gun with him in addition to his sword.

#DEVELOPING: 2 officers injured, one suspect dead after shooting inside Church of @Scientology in Inglewood. @Inglewood_PD found a sword on the suspect but have yet to find a gun. We’re waiting to hear if officers shot each other by accident. —> https://t.co/FdjRRMa6Dq pic.twitter.com/tUx6aPEL45

Two police officers have been wounded and a suspect killed during a shootout at the Church of #Scientology in Inglewood, #California.
The suspect, who was carrying a sword, was shot in the head and died at a hospital, The man was wielding the sword pic.twitter.com/cI0KWfErIO

Another LA chapter of the Church of Scientology was attacked in 2008, when former Scientologist Mario Majorski, 48, confronted the church's guards while wielding two samurai swords. According to the report, the man was saying "something about revenge" and was eventually shot dead by the guards in the course of the confrontation.