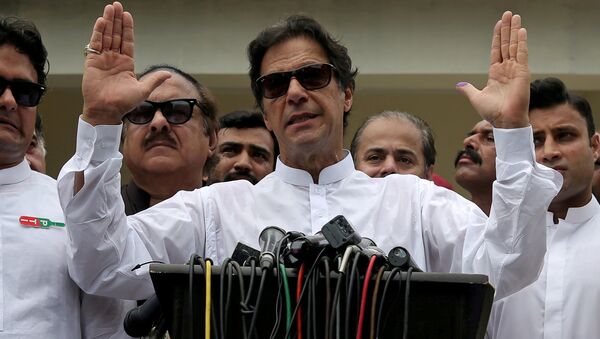 © REUTERS / Athit Perawongmetha
Subscribe
International
India
Africa
The fiery tweet came shortly after Afghanistan recalled the Pakistani ambassador over Prime Minister Imran Khan's remarks that an interim government must be installed to facilitate the Afghan peace process. While Kabul has slammed the comments as interference in internal affairs, Islamabad has stated that they were taken out of context.

Pakistan's Federal Minister for Human Rights Shireen Mazari has labelled John R. Bass, the US ambassador to Kabul, a "little pygmy" in a diplomatic Twitter row that broke out over ongoing peace talks between Washington and the Taliban in Afghanistan.

Clearly you little pygmy your knowledge of ball tampering is as void as your understanding of Afghanistan and the region! Clearly in your case ignorance is certainly not bliss! Another sign of Trumpian mischief a la Khalilzad style! https://t.co/ZOySvWJNDq

Her incendiary tweet came in response to Bass' jibe at Pakistan’s Prime Minister and former cricket star, Imran Khan, over his reported comment, saying Afghanistan should have an interim government to facilitate peace talks with the Taliban as the current government creates "obstruction".

Some aspects of #cricket apply well in diplomacy, some do not. @ImranKhanPTI, important to resist temptation to ball-tamper with the #Afghanistan peace process and its internal affairs. #AfgPeace

Khan's comments have caused an uproar in Afghanistan, with Kabul summoning the Pakistani ambassador on Tuesday.

"Recent statement by the Pakistani Prime Minister is interference in Afghanistan's internal affairs. The Afghan government derives its legitimacy from the Afghan people, but not from the leaders of regional countries who strive to meddle in our internal affairs and decide on the future of our government and our politics".

In response, Pakistan's Foreign Ministry said on Wednesday that the prime minister's remarks had been reported "out of context" and were misunderstood.

"Pakistan has no other interest in Afghanistan but to promote peace through an Afghan-owned and Afghan-led political process", the foreign office said in a statement, adding that the prime minister was only referring to "Pakistan’s model, where elections are held under an interim government. The comments should not be misinterpreted to imply interference in Afghanistan’s internal affairs".

Sebghat Ahmadi, a spokesperson for the Afghan Ministry of Foreign Affairs, however, said that Khan’s comments have not been taken out of context and that they amounted to a clear act of interference.

While #Pakistan has made constructive contributions on the #AfghanPeaceProcess, PM Khan's comments did not. The future of #Afghanistan is for #Afghans, and only Afghans, to decide. The role of the international community is to encourage Afghans to come together so they can do so.

Last week, the Afghan president's national security adviser, Hamdullah Mohib lashed out at Khalilzad, accusing him of "delegitimising the Afghan government", while granting legitimacy to the Taliban and holding negotiations with them on issues officially regulated by Kabul.

Asia
US Airstrike Kills 10 Afghan Children as US, Taliban Continue ‘Danse Macabre’
Mohib further suggested that Khalilzad was attempting to create a "caretaker government" by using the Taliban, in which he would be a "viceroy". The US State Department strongly condemned Mohib's statements.

The Twitter row erupted amid ongoing talks between the Taliban and the United States, who is seeking to secure assurances that the country won't become a safe haven for terrorists plotting attacks in exchange for a military withdrawal. Although the deal hasn't been signed yet, the sides reportedly have agreed to a certain framework and made "meaningful progress" in the talks the last time they met.

Since 2001, the United States has been carrying out a military operation against the Taliban and other groups in Afghanistan as part of its response to the 9/11 attacks. While most American troops left the country by the end of 2014, Washington continues to support the Afghan Armed Forces in combating terrorism.