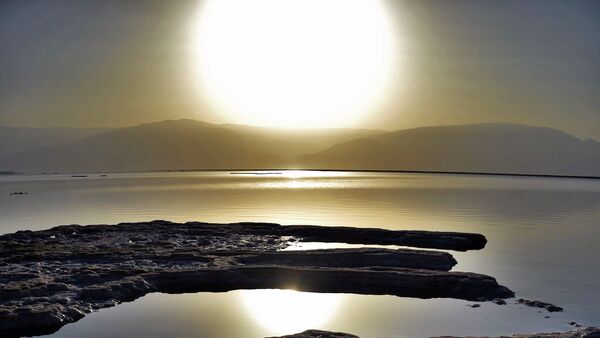 © Sputnik / Pvel Gerasimov
/
Go to the photo bank
Subscribe
Malham Cave, which now holds the title, is a record-breaking 10 kilometres long, a recent expedition there found out. It lies beneath Mount Sodom close to the Dead Sea which is pinned as a possible location of the two legendary cities of Sodom and Gomorrah, destroyed over the indecency of their inhabitants, according to the Bible.

A multinational team of researchers from the Hebrew University of Jerusalem (HU)’s Cave Research Centre (CRC), Israel Cave Explorers Club, and Bulgaria’s Sofia Speleo Club have claimed Malham Cave at Mount Sodom to be the longest salt cave in the world. They are planning to publish their findings, and creating an electronic map of the site, based on the recent data, The Jerusalem Post reports.

Although the underground natural labyrinth was discovered about 30 years ago in the 1980s, the spelunkers, who arrived there in 2018 and 2019, managed to document its record-breaking length of 10 kilometres only recently with the most up-to-date technologies, including laser beams, instead of the tape measures and compasses, they earlier used.

​As one of the researchers, Efraim Cohen, told The Jerusalem Post it was hard work as the cavers had to crawl through icy salt channels with salt stalactites and salt crystals, he described as jaw-dropping.

“Down there it felt like another planet”, Cohen told the outlet.

Over the years since the cave was first discovered, numerous expeditions discovered more than 100 different caves inside, including one that is 5,685 metres in length and uncovered that Malham was 7,000 years old.

According to the scientists, salt caves, which are found in desert regions with salty soils, are constantly changing due to the water, seeping into the ground during occasional rains and creating channels along its way that form into caves after drying out.

“The Malham Salt Cave is a river cave. Water from a surface stream flowed underground and dissolved the salt, creating caves – a process that is still going on when there is heavy rain over Mount Sedom about once a year,” professor Amos Frumkin from the Hebrew University’s Institute of Earth Sciences told The Jerusalem Post.

The Dead Sea area, where Mount Sodom is situated, is named as a possible location of the legendary cities Sodom and Gomorrah cities. According to the Bible, they were wiped away by God for the sinful behaviour of their people. The Book of Genesis says that He let Lot and his family escape, however, Lot’s wife was turned into a pillar of salt for looking back at Sodom.