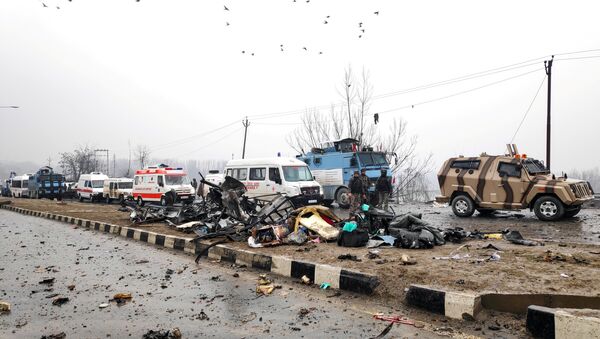 © REUTERS / Younis Khaliq
Subscribe
International
India
Africa
Concluding the investigation of the evidence submitted by India related to the Pulwama terror attack in the Indian state of Kashmir on 14 February, Pakistan reiterated that additional information and documents from India would be essential to continue the process of investigations.

New Delhi (Sputnik): Categorically denying the presence of any terror camps, Pakistan's Foreign Office on Thursday stated that it has thoroughly investigated the entire dossier related to the Pulwama terror attack and has neither found any evidence of terror camps at the locations mentioned by India, nor of any of the persons mentioned therein that could be linked to the said attack.

"During the course of investigations, all aspects of the information provided by India have been thoroughly examined including the 'confessional' video of Adil Dar, 'claim' of responsibility for the attack, WhatsApp and Telegram numbers used to share videos and messages in support of Pulwama attack, list of 90 individuals suspected of belonging to a proscribed organisation and 22 pin locations of alleged training camps", Pakistan's Ministry of Foreign Affairs said on Thursday in a statement.

Asia
Pakistan Seeks More Evidence from India to Act Against Kashmir Terror Attackers
On 27 February, India had shared a dossier related to the Pulwama militant attack in which at least 40 Indian soldiers were killed on 14 February. Pakistan's Foreign Ministry said that it had constituted an investigation team, detained a number of persons for investigations and initiated work on the technical aspects of social media content, on the basis of the Indian paper.

Pakistan also alleged that out of 91 pages and six parts shared as dossier by India, only part two and three pertain to Pulwama attack, other parts are generalised allegations.

Pakistan reiterated that additional information and documents from India would be essential to continue the process of investigations. Pakistan remains committed to taking this process to its logical conclusion, it added.

The two nuclear-armed South Asian neighbours India and Pakistan have been embroiled in an escalated border conflict after the Pulwama terror attack in the Indian state of Jammu and Kashmir that killed over 40 Indian soldiers. Pakistan-based terror outfit Jaish-e-Mohammed claimed the responsibility for the attack.