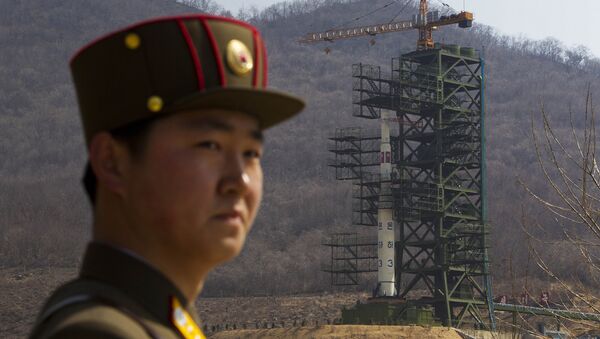 The top US commander in South Korea told Congress Wednesday that US forces on the peninsula wouldn’t be ready if diplomacy between the US and DPRK suddenly collapsed and the military standoff returned. His fears reflected a Western belief that Pyongyang is withdrawing from denuclearization plans, but in Korea, the situation isn’t so clear.

US Army Gen. Robert Abrams, the commander of US Forces Korea, told the House Armed Services Committee Wednesday that, so long as the diplomatic push for denuclearization on the Korean Peninsula continues, his forces have enough intelligence, surveillance and reconnaissance resources to maintain an adequate defense of South Korea and detect an attack from the North. However, if things got worse and the atmosphere suddenly returned to the hostile tension of the past, "then our stance, our posture is not adequate to provide us an unblinking eye to give us early warning and indicators."

US Not Planning to Ease DPRK Sanctions Until Full Denuclearisation - State Dept.

"We're short to be able to do that if things start to turn bad," he said.

"Their activity that we have observed is inconsistent with denuclearization," Abrams said, who commands the roughly 29,000 US troops garrisoned in South Korea. "Despite a reduction in tensions along the Demilitarized Zone and a cessation of strategic provocations, coupled with public statements of intent to denuclearize, little to no verifiable change has occurred in North Korea's military capabilities."

At the same hearing, Randall Schriver, the assistant secretary of defense for Indo-Pacific security affairs, told the lawmakers, "Our door is still open for diplomacy, but to date we have not seen movement on denuclearization."

At the second round of peace negotiations between North Korean leader Kim Jong Un and US President Donald Trump in Hanoi at the end of last month, Washington walked away from the table rather than agree to stop economic sanctions, as Pyongyang had requested.

Sputnik reported last week that Trump administration officials had told Time that Trump was "dismissing the warnings of top intelligence and foreign policy advisers" who said negotiations had failed, because the US head of state believes Kim to be his "friend" with whom he can negotiate directly.

When the two sides went home, many feared the rapprochement formed by the first round of negotiations in Singapore last June had finally fallen apart. Korean analysis website 38 North, which is now part of the Stimson Center think tank in Washington, DC, reported on March 7 that new satellite photos appeared to show the reconstruction of a key rocket test site that Pyongyang had destroyed as a goodwill gesture last summer.

However, the destruction of the Sohae launch site in Tongchang-ri was done to honor the verbal agreement made between Kim and Trump after the formal statement was signed, and its reconstruction now wouldn't represent a violation of the letter of that agreement.

But it's not clear that such a reconstruction is happening, either: on March 18, South Korean news agency Yonhap reported that South Korean Unification Minister Cho Myung-gyon doubted the intelligence conclusions, telling the South Korean National Assembly's foreign affairs and unification committee that there is a "good chance" Pyongyang is working toward further demolishing, rather than reactivating, the Sohae site.

In addition, Pyongyang has seemingly withdrawn its threat to abandon the joint liaison office in Kaesong, which it operates with South Korea and which has served as a major symbol of the two Koreas' move toward peace and reunification. CNN reported the reversal followed news last week that Trump was moving to block new sanctions against the DPRK.

That said, Kim has also made moves to strengthen his position following the collapse of the Hanoi summit, while clearly not giving up on negotiations, either. North Korea's Korean Central News Agency (KCNA) reported Wednesday that Kim called for a "golden age" in "military construction" at a "general meeting" with mostly lower-ranking military officers.

Yonhap also reported on Wednesday that a recent trip to Beijing by Ri Su Yong, North Korea's vice chair of international affairs, had coincided with US special envoy to North Korea Stephen Biegun's visit to the city, although it's unclear if the two men made contact. There's been no official diplomatic exchange between Washington and Pyongyang since the two sides departed Hanoi on February 28.