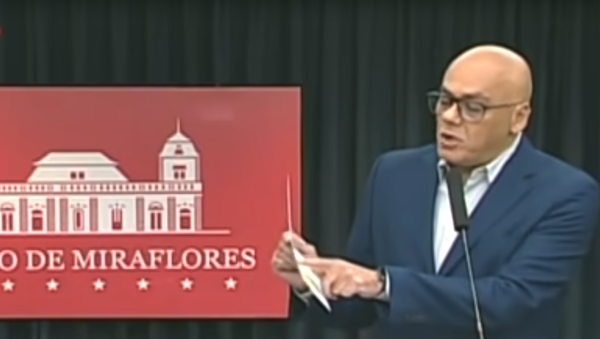 Over the weekend, Venezuelan authorities presented evidence that implicated key Opposition figures in “ultra-right plans to promote regime change.” However, US protests against those arrests display a huge double standard: “The word terrorism has been so distorted” as to only refer to US opponents, an expert told Sputnik, and never to its allies.

Last Thursday, Roberto Marrero, chief of staff to the self-proclaimed Interim President of Venezuela Juan Guaido, was arrested in Caracas on suspicion of leading a "terrorist cell," Sputnik reported.

Since January 23, Guaido has maintained that he is the rightful ruler of the country and not Venezuelan President Nicolas Maduro, who was re-elected last May in elections Guaido never ran in. The US and about 50 of its allies have backed Guaido's claim, while the other three-quarters of the globe continues to recognize Maduro, whose government enjoys the loyalty of the Venezuelan military and the vast majority of the Venezuelan people.

Venezuelan Minister of Interior Nestor Reverol said during a television interview that Marrero was "directly responsible for the organization of criminal groups. A batch of weapons and cash money in foreign currency were seized from him," and the minister produced photos taken in Marrero's house of several rifles.

​Venezuelan Communications Minister Jorge Rodriguez presented on Saturday evidence of the conspiracy, which included communications between key Opposition figures to coordinate the contracting of mercenaries from Colombia and Central America as well as their transport to Venezuela to carry out targeting killings and acts of sabotage in the country.

"We have identified some paramilitaries that have entered Venezuela, and we will search for them by land, sea and air," Rodriguez said during the presentation, noting that "at least half" of the groups the Opposition sought to bring into the country were already there.

This is exactly what observers have feared would happen ever since US President Donald Trump appointed Elliott Abrams as his special envoy to the country.

There is a strange irony, too, that the US would continue to back a group that might be organizing terrorist actions, when Washington has long since declared a "war on terror" worldwide. US National Security Adviser John Bolton tweeted on Thursday that Marrero's arrest was "another big mistake" that "will not go unanswered," and other US officials have protested his arrest as well.

Photos shown during the presentation include details of alleged bank accounts used to pay the mercenaries, which were uncovered when two Russian pranksters spoke with Guaido during a phone call in which they pretended to be the president of Switzerland and offered to transfer to Guaido funds from Maduro's account, Ricardo Vaz, a writer and editor at Venezuelanalysis.com, wrote on Monday.

Rodriguez also provided screenshots of Whatsapp group conversations featuring Opposition leaders including Marrero, Guaido and Leopoldo Lopez, the latter of whom has been under house arrest since 2014 for his role in inciting violent demonstrations.

The country has also suffered another series of blackouts: on March 25, 16 of Venezuela's 23 states suffered a power outage, although power was restored to much of the country that same day. However, another blackout hit late Monday night and lasted into Tuesday.

Rodriguez said the blackouts, like the earlier power loss on March 7, were the result of an attack on the massive Guri Dam, also known as the Simon Bolivar Hydroelectric Plant, which supplies three-quarters of the country's electrical needs. Rodriguez noted that the second attack had damaged both power lines and transformers at the power station.

Vaz told Radio Sputnik's Loud and Clear on Tuesday the power had come back on only an hour before his interview.

Vaz said that while Rodriguez's presentation seems to firmly point the finger at a slew of Opposition figures, the evidence "needs to be taken with a grain of salt, and we need more evidence" before we can draw firm conclusion.

Vaz cautioned that, while it might be difficult to definitively prove the most recent blackouts were the result of cyberattacks originating in the United States, "the other alternative explanations that were put forward become less plausible with time," noting that an explanation floated by the Opposition was that the outages resulted from decaying infrastructure.

"But if that was the case, then the system would not have been brought back online so successfully and so quickly," Vaz noted. However, he noted that the second attack that hit on Monday evening set fire to several transformers at the Guri Dam — equipment that the Venezuelan military has already taken extensive precautions to protect from direct, physical sabotage.

"The idea that the United States or the Opposition would attack the electric grid is not the subject of speculation," Vaz told Sputnik hosts Brian Becker and John Kiriakou. "The best proof, in my opinion, is that when the Opposition was in control of the National Assembly, before it went in contempt of court and pretty much marginalized itself, it tried to pass an amnesty law, where they wanted to provide amnesty for a series of crimes that they alleged were committed for political reasons. One of these kinds [of crimes] was precisely attacks against the electrical grid."

"In the end, it was struck down by the Supreme Court [in April 2016] because it was unconstitutional, but it basically allowed everyone from terrorism to drug offenses to just claim that they had done it for political motives and then be granted amnesty," Vaz told Sputnik.

The law, Venezuelanalysis noted at the time, amounted to "a handwritten confession of seventeen years of right-wing terror aimed at overthrowing the country's democratically-elected Chavista government."

There is a strange parallel in US history, too. On the morning of April 16, 2013, a man attacked Pacific Gas & Electric's electrical substation in Metcalf, California, with wire cutters and a high-powered rifle. The attacker caused $15 million in damage to 17 transformers as well as numerous fiber cables, knocking out local emergency and cell phone services. Although no PG&E customers lost power in the attack, Federal Energy Regulatory Commission chairman Jon Wellinghoff called it "the most significant incident of domestic terrorism involving the grid that has ever occurred," according to the San Francisco Bay Chronicle.

However, in the end, the FBI didn't categorize it as terrorism, as there was no discernible political motivation and none given by any group seeking to claim responsibility for the attack.

"The word ‘terrorism' has been so distorted that it basically means someone acting against the interests of the United States," Vaz observed. "If terrorists advance US interests, then you may be called, you know, a rebel or even someone fighting for democracy and freedom."