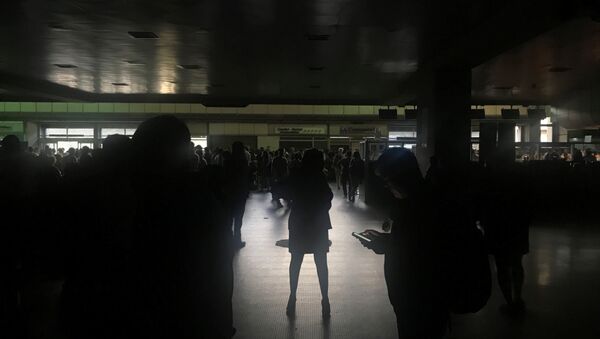 There have been a number of large-scale power outages across the country in recent weeks, with the most massive one to date occurring on 7 March, when over 30 million citizens suffered from lack of access to vital needs like water supplies.

Venezuela’s Communication and Information Minister Jorge Rodriguez has uploaded pictures and videos of a suspected attack on the country’s power station, arguing in one of them that “the criminals” have specifically “generated a fire” to permanently block the transportation of cargo.

A massive blackout that hit several regions in Venezuela, including large swathes of Caracas, as early as on Monday and continued into Tuesday, has severely affected Caracas’ metro, bringing it to a complete standstill, El Nacional reported, adding that the day earlier, three of five lines didn’t work due to repeated disruptions in the electricity supply.

Electricity Supply Restored to Nearly All of Venezuela Following Blackout
As Rodriguez pointed out Monday evening, the power outage occurred due to a second subversive activity within 24 hours on the country’s biggest hydro-electric power station, the Simon Bolivar power plant. In light of this, the Bolivarian Republic’s government proclaimed Tuesday to be a day off, with Rodriguez blasting the opposition for “the attack on the national electric supply system”.

As Venezuela began suffering from a spate of nationwide blackouts, President Nicolas Maduro branded the outages “sabotage” masterminded by the US, adding that “several saboteurs” were detained while attempting to disable the power grid.

On 7 March, a large-scale power outage hit the majority of Venezuelan states, leaving the nation, over 30 million people, without access to basic amenities, including water and medical care at hospitals.

The crisis in the South American country reached its climax after Juan Guaido declared himself “interim president” of the nation in late January, with Maduro as the country’s legitimate head denouncing the self-proclamation and accusing Washington, which imposed new limitations on Caracas, of plotting a coup against him. He vowed to halt what he called outside pressure and stand on guard for the country’s sovereignty.