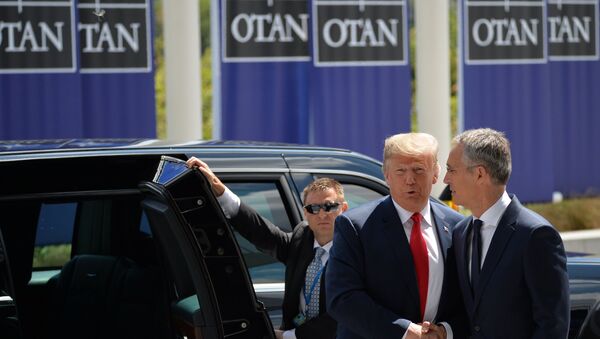 WASHINGTON (Sputnik) - US President Donald Trump will host NATO Secretary-General Jens Stoltenberg on 2 April in Washington, the White House said in a press release on Tuesday.

"President Donald J. Trump will welcome Secretary General Jens Stoltenberg of the North Atlantic Treaty Organization (NATO) to the White House on April 2, 2019", the release said. "In honor of the 70th anniversary of NATO, the President and the Secretary-General will underscore the importance of the Alliance as a bulwark of international peace and security".

Trump has repeatedly stressed that the United States is shouldering too many of the NATO expenses and criticized allies for not paying enough. Trump has also threatened to pull out of the alliance if NATO members do not contribute more to defense spending.

Secret Report Reveals How NATO War Against Gaddafi Could Have Started in Mid-80s
In early March, Bloomberg reported that the Trump administration was considering asking Germany, Japan and, in the future, all other countries hosting US troops to pay the full cost of their deployment plus 50 percent. However, Stoltenberg has said that alleged Washington's idea to charge NATO allies for hosting US troops has not been discussed at the alliance.

Only five out of 29 NATO members — Estonia, Greece, Latvia, the United Kingdom, and the United States — currently meet their commitment to spend 2 percent of their GDP on defense, according to NATO.

Stoltenberg and NATO foreign ministers are gathering in Washington this week to mark the anniversary of the founding of the alliance, which was established when the North Atlantic Treaty was signed on 4 April 1949.

Stoltenberg has said that he had also accepted the invitation to address a joint meeting of US Congress in April and was looking forward to speaking before US lawmakers.