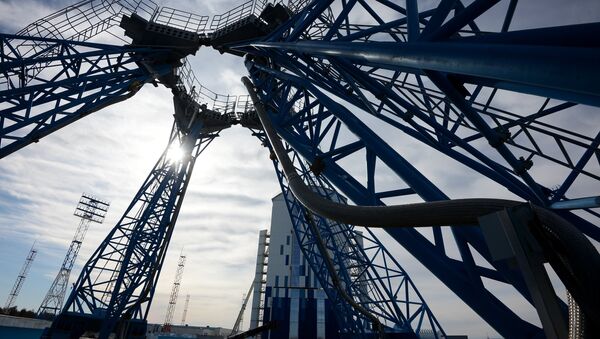 MOSCOW (Sputnik) - The blastoff of the Meteor-M meteorological satellite number 2-2 by the Soyuz-2.1b carrier rocket with the Fregat upper stage from the Vostochny space center is scheduled to take place in three months, Russian state space corporation Roscosmos told Sputnik.

"The blastoff date for Meteor is June 27 from Vostochny", it said.

The Vostochny Сosmodrome has been under construction since 2012. The cosmodrome is one of the most expensive spaceports in the world with an estimated price of $7.5 billion. A total of four launches have been carried out from the cosmodrome since it was put into operation.

The Vostochny cosmodrome is the first civilian-only spaceport in Russia, designed to prepare and launch spacecraft for scientific, socio-economic and commercial purposes.

It ensures Russia’s independent access to space. Before its construction, there was only the Plesetsk military space center. Civilian launches had to be carried out from the Baikonur cosmodrome in Kazakhstan, which Moscow leases from Astana.

Russia
Russia's Vostochny Cosmodrome Ready for Space, ISS Launches - Roscosmos
The cosmodrome is located between the rivers Zeya and Bolshaya Pera, 8,000 kilometers (4,970 miles) from Moscow and 180 kilometers from the city of Blagoveshchensk. Its area is about 700 square kilometers (270 square miles).

The cosmodrome is situated in the safest region of Russia in terms separations and falls of the rocket’s lower stages. All the separated parts are returned to Earth to hard-to-reach and sparsely populated areas and then are disposed. Vostochny is close to major transportation networks such as the Baikal-Amur Mainline and the Chita-Khabarovsk Highway. There is also a large supply of electricity production resources in the region.

Viral
Aliens on the Moon? New VIDEO Sparks UFO Speculation Online
The first historic launch of the Soyuz-2.1a rocket from the Vostochny cosmodrome was successfully carried out on 28 April 2016. The second launch on 28 November 2017 was unsuccessful. The Soyuz-2.1a launch began properly, but later it turned out that 19 satellites, delivered by the Fregat booster, had never reached its target orbit.

The Roscosmos Commission, which was investigating the failure, said the reason for the unsuccessful launch was an algorithmic error in the Fregat control system program. There was no negative feedback on the work of the cosmodrome, according to the results of the investigation. The third launch took place on 1 February 2018. The launched Soyuz-2.1a rocket with the Fregat booster delivered two Russian and nine foreign satellites to the target orbits.

READ MORE: Pence Calls for Americans to Return to Moon Within 5 Years 'By Any Means'