'Sometimes You Don't Want to Make Small Talk': The Upsides of Robot Waiters 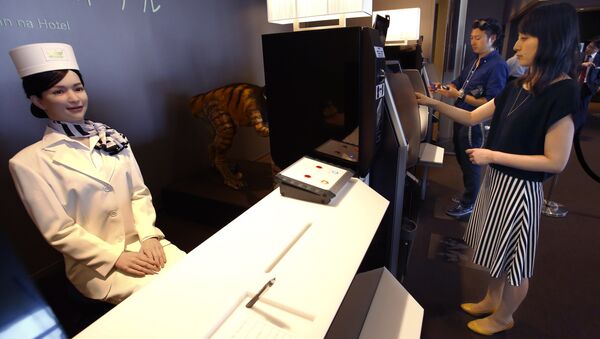 © AP Photo
Subscribe
International
India
Africa
More than 1.5 million jobs are at risk from automation, with waiters, bar staff and dishwashers among the most under threat. Sputnik spoke to the Chief Executive of the Institute of Hospitality, Peter Ducker, and a customer, Elle Harris, about the importance of human interaction.

Research by the Office for National Office for National Statistics (ONS), published on Monday, 25 March, suggested that as artificial intelligence (AI) and robotics improves they might threaten the livelihoods of hundreds of thousands of workers in the hospitality industry.

"When considering the overall risk of automation, the three occupations with the highest probability of automation are waiters and waitresses, shelf fillers and elementary sales occupations, all of which are low skilled or routine," said the ONS report.

Peter Ducker, Chief Executive of the Institute of Hospitality, said he found their conclusions "very surprising."

#Robots replace waiters in #China restaurant😇
A little #robotic waiter wheels up to the table, raises its glass lid to reveal a steaming plate of local #Shanghai —style crayfish and announces in low, mechanical tones, "Enjoy your meal. pic.twitter.com/jCPwRr2Stx

​"You would need a very sophisticated robot to be a waiter or waitress and the technology is just not there yet," Mr Ducker told Sputnik.

"People enjoy the experience of going to a restaurant or hotel and it's all about the service, that special service which is human contact, the warmth of the staff, that's what makes you and I have an enjoyable experience and a robot can't give you that, at least not now," Mr Ducker told Sputnik.

He said there was a hotel in Japan, the Henn-na, which was staffed entirely by robots.

The Loneliness of the Robot Hotel Guest

"People who go there say it's an interesting experience but they don't want to go back. They felt lonely," Mr Ducker told Sputnik.

He also pointed out that on Royal Caribbean cruise ships there were two robotic bartenders which were "five times slower" than human barmen.

A cafe in Tokyo is using robotic waiters that are controlled remotely by people with severe disabilities to help them gain employment. They use a system that tracks eye movement to control the robots.
https://t.co/szIQbaQwTF pic.twitter.com/XT26jJyhMl

​Marriott hotels now have robots which respond to room service and deliver items such as toothbrushes to guests.

"It's as much about the novelty value as pure efficiency or productivity," Mr Ducker told Sputnik.

Mr Ducker said increasing automation could alienate customers and create a "disturbing future" where people travelled in driverless cars, checked into hotels using machines, interacted with robot waiters and then went to sleep alone, or with sex robots.

But what do people in Britain think of the idea of robot waiters and bar staff?

​Elle Harris, 22, an accounts assistant from London, said: "If you are in a bad mood or don't particularly want to make small talk then it is easier dealing with a robot."

"I wouldn't have a problem with a robot waiter in a casual restaurant where you just want to get in and out, however in an upper class restaurant you do expect high quality table service with human interaction. Also at a bar most of time you just want to grab a drink quickly however if you want a suggestion or a bit of conversation a robot wouldn't be able to offer that," Miss Harris told Sputnik.

Just Think — You Wouldn't Have to Tip Waiters

She said she would prefer her automated server to be "male" and said it would also save customers money as they would not have to tip their waiters.

Miss Harris, who has worked in a restaurant and a nightclub, said hospitality staff were generally not given the credit they deserve.

Saw a bar with robot barmen. U can choose ingredients & it makes it. pic.twitter.com/WjeewXhcbM

​"​Working in a restaurant or bar is really labour-intensive and you can be on your feet for up to 10 hours per shift. You have to be switched on 100 percent at all times and there's always something to be done. Tips aren't guaranteed so when your basic wage is low it demotivates you and makes you question why you're putting in maximum effort for minimum reward," Miss Harris told Sputnik.

She also pointed out there was a downside for young people, who often get their first part-time jobs in the hospitality industry while at college or university.

"​Young people would really struggle if part-time jobs in restaurants and bars weren't available as at that age you have limited experience and customer service skills so more skilled jobs are given to older people. The hours offered with these types of jobs often works well with studying either at uni or college as you can work evenings and weekends," Miss Harris told Sputnik.