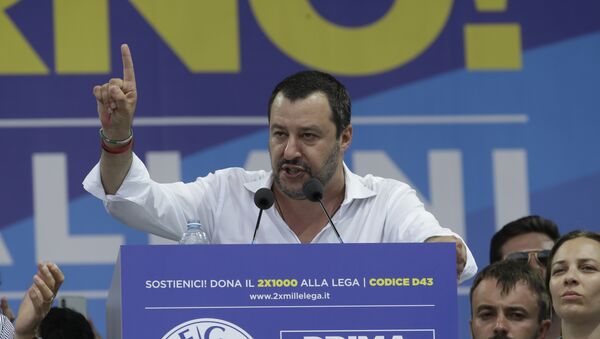 © AP Photo / Luca Bruno
Subscribe
On 22-23 March the Confcommercio Forum was held at the Villa D’Este in Cernobbio, Italy; one of the participants was the country’s Minister of the Interior and Deputy Prime Minister Matteo Salvini. Sputnik spoke to Salvini to find out about his forecast for the upcoming European elections.

"I don't make predictions, I look at numbers. In the previous elections, we [right-wing parties] had 6%. This time it will be more. I'll be satisfied even with a small rise," Salvini told Sputnik.

When asked whether right-wing parties will be able to gain 20%, Salvini responded that he "liked that number".

Sputnik: Italy has been in the Eurozone for 20 years already. In your view, what are the results of this period?

Italy's Belt and Road Deal Sparks EU Concerns Over Future Relationship
Lara Comi: I'm in favour of staying in the Eurozone. But it should be modified so that all 27 EU member states [without the UK] used the euro, and the ECB was transformed into a Federal Reserve System.

Sputnik: But not Eurozone 1 or Eurozone 2 for Northern and Southern Europe, as economists once predicted?

Lara Comi: No, one Eurozone is enough. The problem in Italy was the initial exchange rate. This was our main mistake.

Sputnik: What do you think of Brexit?

Lara Comi: The fact that the process would start on 30 June was inconceivable, it seemed just a joke… I would support the second referendum and ask the citizens again. I know that you can't do it; no one would allow that…