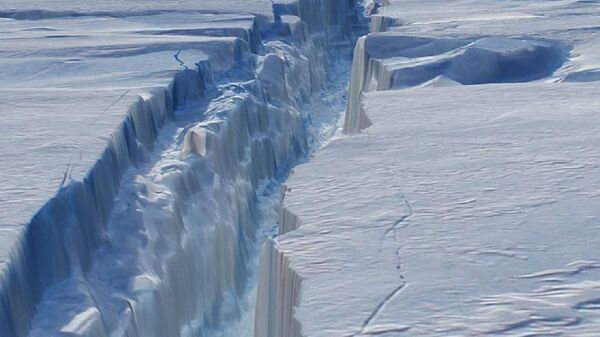 An International scientific mission has come across a massive amount of subglacial water that could significantly impact the predictions of the consequences of climate change, as the studied glacier alone drains an area of Antarctica that contains enough ice to raise the sea level by about seven metres.

An international team of researchers from the Australian Antarctic Program has discovered a network of lakes lying under the ice during their 160-day expedition to the Totten Glacier, the largest in eastern Antarctica. According to glaciologist Dr Ben Galton-Fenzi, the " substantial amount of water" found in these lakes could impact the predicted rise of the sea level.

The researchers drilled the ice and placed explosives at a depth of 2 metres, detonated them and tried to record the sound, reflected by the different layers and bedrock beneath the ice sheet using special microphones — geophones. It allowed them to form an image of what lies beneath the ice, which could be crucial for studying processes that possibly contribute to the rise in sea level.

"In the context of climate change, we need to understand the characteristics of the bed, because they exert a very powerful control over the flow of the glacier", the scientist told the Australian broadcaster ABC.

The media outlet cites scholar Madi Gamble Rosevear as saying that the surface under the ice sheet influences the speed at which it slides, noting that soft sediment or water make the glacier move quickly, while dry rock slows it down.

Galton-Fenzi pointed out that the current estimation by the Intergovernmental Panel on Climate Change (IPCC), which predicts a metre-rise in sea levels by 2100, does not take the ice discharge in Antarctica into account. Meanwhile, the 2-kilometre-thick glacier alone that they studied drains an area containing enough ice to raise the sea level by several metres.

"If I took all the ice contained in the catchment, spread it out over the global oceans, sea levels would go up seven metres. We actually know for a fact that the Totten Glacier is one of the regions that's actually changing”, he said, as cited by ABC, warning that the studied Antarctic region is expected to change first, as warmer water was found under the ice sheet.