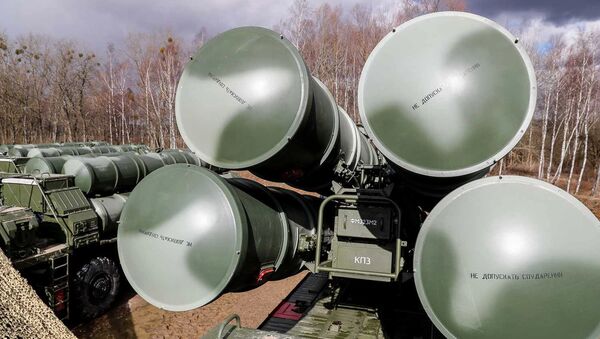 © Photo : Department of information support of the Baltic region
/
Go to the photo bank
Subscribe

Earlier this month, the Turkish President pointed out that the S-400 missile systems that Ankara is buying are not connected to the security of NATO, the United States or the F-35 purchase agreement in any way.

“There will be no backward steps on the S-400 issue. As for the Patriot [missile systems], if the US offers us acceptable conditions, we are open for them too,” Erdogan stressed.

His remarks came a few weeks after he rejected the Pentagon's ultimatum on Ankara's purchase of the S-400s.

“The S-400s we're buying are not connected to the security of NATO, the United States or the F-35 in any way,” Erdogan said, adding that “the reasons for our purchase of these systems are obvious”.

He voiced hope that the problems in relations between Turkey and the US over Ankara's purchase of the Russian air defence system could “be resolved in the same way as it has on other issues”.

Also this month, Erdogan confirmed that the signatures had already been made on the Russia-Turkey deal for the S-400 supplies and that the first delivery will be made in July.

“This is over”, he said, adding that his government will not cancel the deal, despite protests from Washington.

The statement followed comments by US Department of Defence spokesperson Charlie Summers that “there would be grave consequences” in terms of the US-Turkish military relationship, as well as the Patriot interceptors and the F-35 fighter jets if Ankara went ahead with the purchase of the S-400s.

Turkey to Face 'Grave Consequences' for Acquisition of Russian S-400 - Pentagon
Turkish Defence Minister Hulusi Akar, for his part, said that Ankara was expecting the delivery of the F-35s in November despite Washington’s criticism of Turkey’s decision to buy the S-400s.

Russia and Turkey inked a $2.5 billion contract for the sale of four S-400 batteries in late 2017, with Ankara set to become the fourth country to possess the system after Russia itself, Belarus and China.