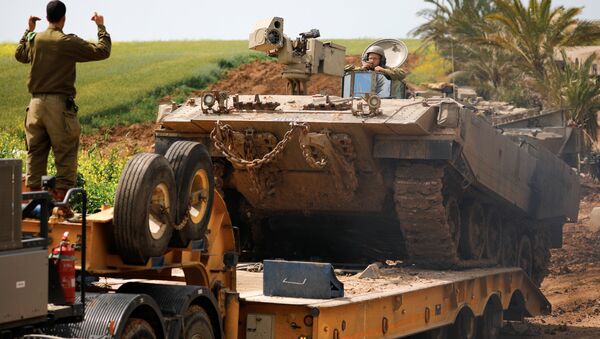 The development comes after Israeli Prime Minister Benjamin Netanyahu cut short his trip to the US on Monday after at least seven people were injured when a rocket fired from Gaza struck a residential building in central Israel.

Israel has deployed two infantry brigades and armoured units to the Gaza border, the country’s media reported on Monday.

The reported deployment comes after the Israel Defence Forces (IDF) accused Hamas of carrying out a rocket attack from the Gaza Strip earlier this day.

“Hamas has launched a rocket from the Gaza Strip toward central Israel. It’s a rocket made by Hamas”, IDF spokesman  Avichay Adraee said.

We can confirm that #Hamas is responsible for firing a homemade rocket. It flew a distance of 75 miles across Israel and then destroyed this home: pic.twitter.com/nXytl8hcfl

In a separate development on Monday, Israeli Prime Minister Benjamin Netanyahu said that he would cut his visit to the United States and return to Israel to take charge of a response to the attack from Gaza.

"In the light of the events related to the security, I have decided to shorten my visit to the United States. In a few hours I will meet with [US President Donald] Trump and immediately return to Israel to control our actions on the spot”, Netanyahu said.

Netanyahu is due to meet Trump at the White House for the expected signing of an order recognising Israel’s sovereignty over the Golan Heights.

WATCH: A rocket from Gaza hit this Israeli home at 5:20 this morning. pic.twitter.com/89agEirzP4

His statement came after at least seven people, including children, were injured in the early hours of Monday morning by a Palestinian shell that hit a crowded residential neighbourhood in Israel.

Israel has activated its missile defence systems several times this month due to the registered rocket launches from the Gaza Strip on Israeli territory.

In the first week of March Israeli fighter jets conducted airstrike on several targets in Gaza after air attack sirens went off in the southern region of Israel bordering the Gaza Strip.

Rocket Alert Sirens Heard in Southern Israel Near the Gaza Strip - Report
On Thursday, Trump tweeted that 52 years on, “it is time for the United States to fully recognise Israel's sovereignty over the Golan Heights, which is of critical strategic and security importance to the State of Israel and regional stability”.

1981 saw an Israeli law which extended the country's jurisdiction over the territory, a move that has never been recognised internationally and that further worsened Israeli-Syrian ties.