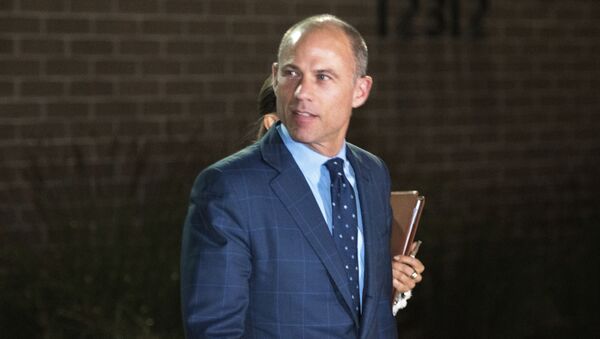 Michael Avenatti, who once represented adult film star Stormy Daniels in her case against US President Donald Trump, was arrested Monday on charges of operating "an old-fashioned shakedown" by trying to extort athletic apparel company Nike of millions of dollars. A separate, unrelated complaint has also charged him with bank fraud.

Separate charges were brought against Avenatti in New York and Los Angeles courts on Monday.

Federal prosecutors in New York on Monday accused the lawyer of four counts of extortion for "attempting to extract more than $20 million in payments from a publicly traded company [Nike] by threatening to use his ability to garner publicity to inflict substantial financial and reputational harm on the company if his demands were not met."

"As alleged, Michael Avenatti approached Nike last week with a list of financial demands in exchange for covering up allegations of misconduct on behalf of the company," FBI Assistant Director in Charge William Sweeney Jr. said in a Department of Justice statement Monday. "The lofty price tag included a $1.5 million payoff for Avenatti's client and upwards of tens of millions of dollars for the legal services of his firm — services Nike never requested. This is nothing more than a straightforward case of extortion."

According to New York prosecutors, Avenatti and an unnamed co-conspirator "threatened to release damaging information" about Nike if the company didn't buy him off, telling the company's attorneys that if they didn't pay him, he would "go take $10 billion off your client's market cap… I'm not f**king around."

Reading through #AvenattiArrested court doc & stumbled upon this absolute gem:

Avenatti responded, in substance and in part, by asking whether Attorney-1 has ever "held the balls of the client in your hand where you could take five to six billion dollars market cap off them?" pic.twitter.com/4tKjzmUUNo

​Two people familiar with the matter told the Wall Street Journal Monday that the unnamed co-conspirator was none other than CNN legal analyst Mark Geragos. However, no charges have yet been levied against the high-profile California attorney.

"Nike will not be extorted or hide information that is relevant to a government investigation," the company said in a statement to Fox News. "Nike has been cooperating with the government's investigation into NCAA basketball for over a year. When Nike became aware of this matter, Nike immediately reported it to federal prosecutors. When Mr. Avenatti attempted to extort Nike over this matter, Nike, with the assistance of outside counsel at Boies Schiller Flexner, aided the investigation. Nike firmly believes in ethical and fair play, both in business and sports, and will continue to assist the prosecutors."

In Los Angeles, unrelated bank and wire fraud charges also brought against Avenatti on Monday alleged that "he embezzled a client's money in order to pay his own expenses and debts — as well as those of his coffee business and law firm — and also defrauded a bank by using phony tax returns to obtain millions of dollars in loans," according to a Department of Justice press release. He also "allegedly defrauded a bank in Mississippi by submitting to the lender false tax returns in order to obtain three loans totaling $4.1 million for his law firm and coffee business in 2014."

"A lawyer has a basic duty not to steal from his client," said United States Attorney Nick Hanna in the press release. "Mr. Avenatti is facing serious criminal charges alleging he misappropriated client trust funds for his personal use and he defrauded a bank by submitting phony tax returns in order to obtain millions of dollars in loans."

Avenatti was taken into custody in New York and faces up to 47 years in prison if convicted on all charges in the New York case, as well as an additional 50 years if convicted of both charges in the Los Angeles case. He was subsequently released Monday evening by a New York federal magistrate judge on $300,000 bond.

After his release, the attorney said he expects to be exonerated and will continue to fight "against the powerful."

Avenatti came into the national spotlight after adult film actress Stormy Daniels alleged that Trump had paid her off in October 2016 to the tune of $130,000 in exchange for her keeping quiet about a 2006 fling she'd had with the real estate mogul. Her March 2018 lawsuit alleged the agreement to be invalid, as Trump himself had never signed it.

It was later revealed that Trump's personal lawyer, Michael Cohen, had paid Daniels out of his own pocket. He pleaded guilty to eight charges in August 2018, including a campaign finance violation, as well as numerous other financial crimes the investigation had uncovered.