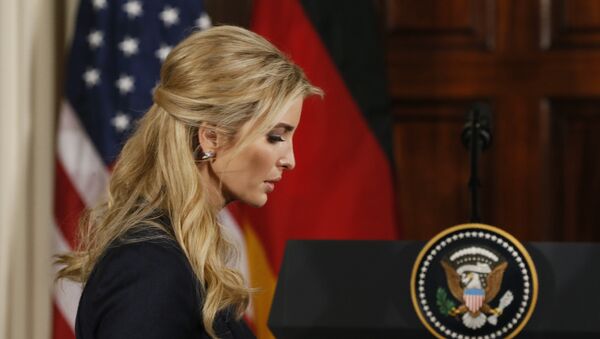 The fallout from Huffington Post editor-at-large Vicky Ward's controversial new book 'Kushner Inc' continues to roll in, with its claims, dismissed by an Ivanka Trump spokesperson as "fiction," continuing to make waves online almost a week after its release.

The book, claiming to offer insights into Ivanka Trump and Jared Kushner's role at the White House, is reportedly based on 'hundreds of sources', and has already 'revealed' the president's attempts to expel the pair from the White House, conflicts between Ivanka and ex-Trump chief of staff Steve Bannon, and cited Melania Trump as being the only person in Trump's inner circle who could stand up to Ivanka and win.

However, perhaps the most audacious claim in the book, made by former Trump economic advisor Gary Cohn, is that Ivanka wants to be president one day.

"She thinks she's going to be president of the United States," Cohn said, according to the book. "She thinks this is like the Kennedys, the Bushes, and now the Trumps," the disgruntled Trump employee, who left his post as Trump's chief economic advisor in April 2018 following a conflict with Bannon, added.

As might be expected, the claims sparked a massive debate online, with Donald Trump' opponents terrified at the thought of another Trump at the helm at the White House.

Doesn't this make you want to barf? 🤮

We must seriously believe them when they speak. They're so removed that they actually think it's their time & a Trump dynasty is their destiny. For them, Americans are a simple, dumb bunch. This set is utterly serious with their twisted agenda & America is caught in the middle.

If 2 Bushes we're bad, 2 trump's would be disaster

None of these people should ever have been allowed inside the White House with a visitor's pass, let alone carte blanche. https://t.co/EGHh1m6K3M

I believe she could win. Too bad you took the very low road to success…she’s clearly out of your league — class, beauty, and brains. pic.twitter.com/cEIoxgUviC

Ivanka Trump will be the First Woman President of the United States 2024! pic.twitter.com/DJJh52uk8f

More level-headed users on both sides took a more neutral approach, however, with some Trump opponents urging their fellow anti-Trumpers not to dismiss the reports entirely, while a few Trump supporters admitted that as much as they "love" Ivanka, they wouldn't like to see her as president.

Respectfully, if her father was elected President, why is it impossible that she could be elected president? And we should never assume women would not vote for her. Plenty of them voted for her dear old Dad?. Just sayin.'

I love Ivanka but I'd have to pass on that one