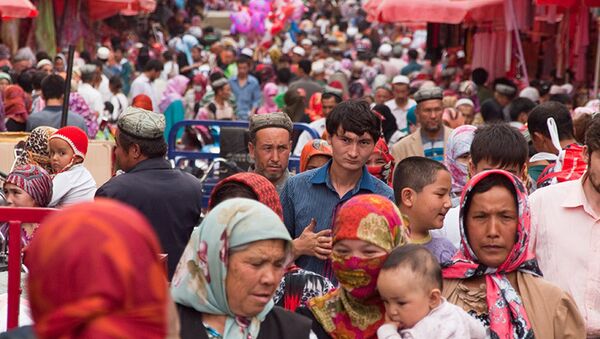 On a crisp March day in Kashgar, the biggest city on the western edge of the Xinjiang Uygur autonomous region, men and women danced for hours to traditional music to celebrate the marriage of a young couple.

Yi Fan — The veiled bride was thrown up in the air repeatedly amid laughter, cheers and songs of best wishes. It was a typical Uygur wedding－festive, flamboyant and boisterous.

However, such a scene would have been unthinkable just three years ago when radical elements forbade singing and dancing at weddings in Muslim communities. Xinjiang, China's gateway to Central and West Asia, has borne the brunt of the growing infiltration by extremists in recent years.

Religious fanatics preaching an extreme, distorted version of Islam asked local Muslims to reject everything produced by non-Muslims, from facial tissues to government-paved roads. Some even incited violence and the killing of "infidels", which they believe is a pathway to heaven.

Such pernicious influence of extremist ideology, coupled with the "East Turkistan" separatist movement in Xinjiang, has created an explosive mix. Since the 1990s, violent terrorist forces have launched thousands of terrorist attacks across Xinjiang, claiming the lives of hundreds of police officers, among others. In one of the most appalling attacks in July 2009, "East Turkistan" forces indiscriminately killed 197 people and injured more than 1,700 in coordinated attacks in Xinjiang's capital Urumqi. In July 2014, a 74-year-old Imam was cruelly butchered by extremists at Etigar Mosque in Kashgar.

No responsible government will allow such extremist and terrorist rampages, particularly in Xinjiang, a vital passage of the ancient Silk Road, which is one-sixth of China's land territory and home to 56 ethnic groups and major religions. A stable, united and prosperous Xinjiang is indispensable to the great rejuvenation of the Chinese nation.

While firmly cracking down on hardcore terrorists, the regional government of Xinjiang has proactively explored effective counter-terrorism approaches in the light of local realities so as to address both the symptoms and root causes. The result has been a preventive counter-terrorist approach focusing on the removal of the breeding ground for terrorism and Islamic fundamentalism. As part of this endeavour, vocational education and training centres were established in the region with the aim of de-radicalizing and rehabilitating minor offenders and vulnerable people that have been influenced by extremist ideologies.

Analyst: China Faces Sustained Campaign to Malign It Over Xinjiang
Xinjiang Not Alone in Fighting Terrorism

Xinjiang is not alone in its exploratory efforts. Such examples abound in countries which have outlawed terrorist activities and carried out de-radicalization and correction programs or established counselling and care centres. The UN Global Counter-Terrorism Strategy also urges countries to take urgent actions to prevent and combat terrorism, and address the conditions conducive to the spread of terrorism.

The Xinjiang regional government understands that it should follow the following principles to make its anti-terrorist work successful.

First, it has to tackle the root causes of terrorism. Just like in traditional Chinese medicine, the best doctor cures a disease before it spreads or becomes serious. The training centres in Xinjiang provide free national language classes and religious policies to instil in the trainees a sense of tolerance and harmony and free them of extremist ideologies.

Recognizing the correlation between poverty and extremism, the training centres teach vocational skills, in order to help trainees acquire jobs and improve their lives. At the national level, the central government made fiscal transfers to Xinjiang totalling more than half of its budget in 2018, which helped reduce Xinjiang's poverty headcount ratio from 12.6 percent in 2017 to 6.5 percent in 2018.

Xinjiang City Urges Terrorists to Turn Themselves in Within 30 Days
Second, it has to promote mutually reinforcing progress of security and human rights. For the 24 million people of Xinjiang, security tops their list of human rights. Without security, there cannot be any human rights. And greater security guarantees better protection of human rights. Xinjiang's approach thus aims to more effectively meet the security needs of the people in general while protecting the rights and freedom of those vulnerable to terrorist influence. For example, the trainees' human rights, together with their ethnic customs and religious beliefs, are well respected at the training centres.

Third, there has to be strict observance of the law and all measures have to be within the confines of the law. Xinjiang's counter-terrorism measures are guided by China's Criminal Law and Anti-Terrorism Law and the regional de-radicalization regulations. The training centres run courses on national and local laws, helping the trainees understand that religion is not above the law, and everyone, be it a believer or non-believer, must abide by the law and will be held accountable for violating the law, regardless of his or her religious belief.

Promoting an Inclusive Sense of Security

Thanks to these measures, Xinjiang has been free from terrorist attacks for 26 months. It saw a record number of 150 million visitors in 2018, an increase of more than 40 percent year-on-year, including 2.6 million from overseas. From Uygur shop owners to ethnic Han girls in community schools, the sense of security is reassuring for people going about their daily business.

No country has a perfect formula for combating extremism and terrorism; adopting double standard does not help. Xinjiang will continue to improve its counter-terrorism measures as the situation evolves. Many challenges still lie ahead. But one thing is sure, with help from the central government and the support of the region's residents and people across China, Xinjiang will embrace an even more promising future.