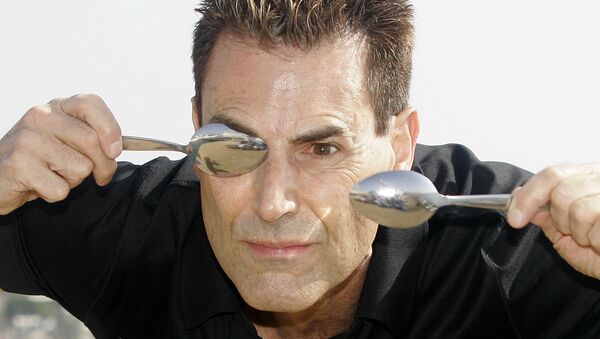 © AP Photo / Lionel Cironneau
Subscribe
Uri Geller, the Israeli-British psychic, famous for his legendary spoon-bending trick with the use of only his psychic powers, wrote in an open letter addressed to the UK Prime Minister Theresa May that he is going to stop Brexit “telepathically”.

In his letter, Mr Geller urges Theresa May to stop the Brexit process as soon as possible, claiming that a lot of British people, as well as Uri himself, oppose the idea of Britain leaving the EU.

"I feel psychically and very strongly that most British people do not want Brexit. I love you very much but I will not allow you to lead Britain into Brexit. As much as I admire you, I will stop you telepathically from doing this — and believe me I am capable of executing it," wrote the psychic.

READ MORE: Uri Geller Explains Why He Would Never Use His Mind Power to Move Football Again

To show the seriousness of his intention, Geller reminded the UK Prime Minister of similar feats he has previously carried out such as bombarding the mind of the Soviet Union's chief nuclear negotiator to influence him telepathically to sign the Nuclear Arms Reduction Treaty. He also added that his power has been validated by the CIA, MI5 and Mossad.

Jeremy Corbyn Set to Discuss Possibility of ‘Soft Brexit’ With Theresa May
"I have influenced many high ranking officials around the world. On one occasion, Senator Clayborne Pell, then the chair of the Senate Foreign Relations Committee, directed me to bombard the mind of Yuli Vorontsov, the Soviet Union's chief nuclear negotiator, to influence him telepathically to sign the Nuclear Arms Reduction treaty, which I did successfully," he wrote.

Geller also claims that he is still using the power of his mind to ensure that "Jeremy Corbyn never gets the keys to Number 10 Downing Street".

In his open letter, Geller stressed that he predicted May becoming UK Prime Minister.

"You visited my home in Sonning, where you also lived. Three years before you became Prime Minister, I predicted your victory when I showed you Winston Churchill's spoon on my Cadillac, which I asked you to touch," the illusionist wrote.

READ MORE: Brexit for Dummies: What Would a No Deal Really Look Like to Average Briton?

Previously, in an interview with Sputnik after discussing a football incident in Scotland, when Mr Geller allegedly moved a ball with his mental powers before a penalty, the psychic said that it was "unethical" and that he would never again use his powers to move a football. However, it seems that such ethical restrictions do not apply to Brexit.

000000
Popular comments
. The Idiot. The Brexit is not happening anyway. So, he is going to take credit for what is bound to happen naturally. The CIA and the KGB hugely experimented on battle usefulness of telepathy. Results? NADA. Absolute zero.

PranSa
23 March 2019, 07:41 GMT1
000000
He turned out to be a charlatan many years ago. The only thing he can do is bending a spoon with a trick, maybe with the help of a battery hidden somewhere like a hole in his body. If he wants to do something, he must try to burst the Trump Baby Baloon.