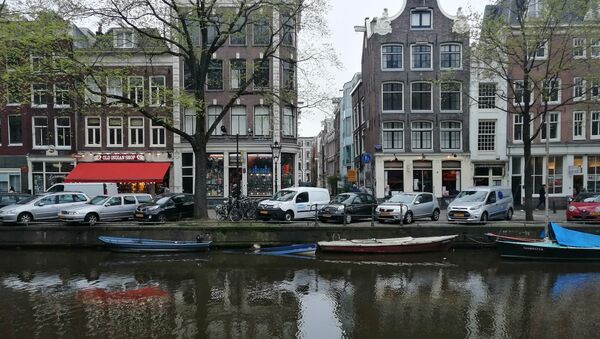 Denis Bolotsky
All materialsWrite to the author
Euroscepticism, conservative values and opposition to current immigration policies have put Holland's Forum for Democracy, a newcomer in Dutch politics, at the top of the country's political Mount Olympus during this week's provincial elections.

It's almost midnight on Wednesday, 20 March, and the crowd inside a small hotel in central Holland's Zeist is glued to the TV screens. Every once in a while, the room explodes with applause as exit poll results from provincial council elections come in.

Forum for Democracy (FvD) grew in just a little over two years, from a think tank founded by two lawyers — Thierry Baudet and Theo Hiddema, into a political force, which may play an important role in the country's politics in the coming years.

FvD candidates did very well in the majority of 12 provinces, pushing “the usual list” of mainstream parties, as well as “traditional” right-wing movements into “the red zone”. pic.twitter.com/Fs3uAe0ox1

The crowd goes wild, as the party leader — 36-year-old Thierry Baudet, takes the stage to deliver his speech. In his address, Baudet slammed Holland's mainstream media, universities, and the "cartel of ruling elites" for indoctrination attempts and undermining the Dutch people:

"Economic simpleton" Mark Rutte raised taxes at the deepest point of the crisis, which resulted in the stagnation of purchasing power, pensions cannot be indexed, and now a total 2.5 million people in our society are below the poverty line — unemployed, or quasi-unemployed. After that, the next Rutte cabinet opened the borders, breaking one immigration record after another".

Leader of FvD in the Netherlands, Thierry Baudet, feeling triumphant after exit polls yesterday, rails against 'universities', 'journalists', and those who have received 'arts subsidies' for having undermined 'Western Civilization'. https://t.co/UeIrr1BJkw

On the domestic front, opposing the massive wave of immigration became one of the key policies for FvD — a clear sign that voters have grown increasingly critical of how the government and law enforcement agencies handle immigrant assimilation as well as radicalism among the newcomers.

Annabel Nanninga was the leading candidate for the FvD one year ago in her home city of Amsterdam, where she eventually won a municipal council seat. She says that even despite being a minority, the three FvD representatives in the council managed to reshape the local political landscape.

"Amsterdam is an extremely 'leftist city'. Even parties that are right-wing, their factions in Amsterdam are left-wing. And the first thing we managed to do is to bring opposition, to bring choice into Amsterdam politics. And you could also see that the Liberal Party was extremely "left" in Amsterdam — they used to welcome asylum seekers, et cetera, and they've already made a big pull to the right, only because of our presence."

When it comes to foreign policy, according to Dorien Rookmaker — a candidate who ran for public office under the party's flag for the first time, countering the growing power of the EU is another pillar of FvD platform.

Dorien Rookmaker, FvD: "The EU is interfering with national issues, such as welfare and environmental issues, and [with] foreign policy as well. We want to take a more independent course in these issues.” pic.twitter.com/fn0kZWG0E9

Since FvD's inception, Thierry Baudet was a proponent of improving relations with Russia, which landed him in hot water domestically. Mainstream politicians immediately labelled him a Kremlin sympathiser — a harsh accusation in today's Holland.

However, it was also Baudet, who called for the increase of defence spending to 2% of the country's GDP; some perceived it as a hat tip before Trump with his "NATO members should pay an equal share" rhetoric, and, in such a case, being the exact the opposite of  what would make "the Big Russian bear" happy.  Nevertheless, Baudet denied that his "2 percent initiative" was NATO-related.

'The Baudet-effect': new far-right party FvD biggest winner Dutch provincial elections; based on results of the exit polls it will enter the Dutch Senate as second largest party (as the provinces will elect the Dutch Senate) https://t.co/XR0gS0ImoI pic.twitter.com/RmnUSWA05K

The official results of the Dutch provincial councils' elections have yet to be published. The manual vote count will be finished on March 25th. But it's already clear that the growing popularity of Thierry Baudet's party may lead to this new "right full rudder" trend playing an increasing role in Dutch politics.

Neither the ruling VVD party nor the right-wing PVV responded to Sputnik's requests for comments regarding the outcome of provincial elections at the time of publication.

000000
Popular comments
Is this a another sign of a rising trend in Europa?