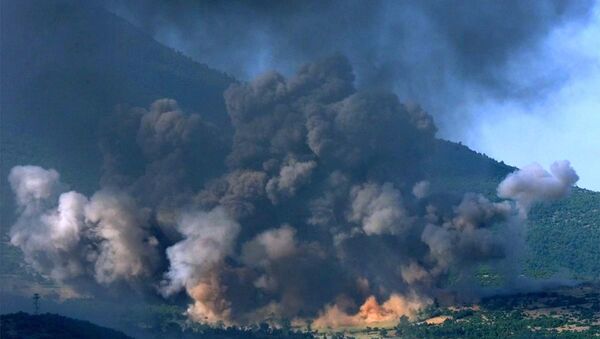 "This is when notions began getting mixed up and the Americans decided to destroy the international legal framework and replace it with some rules that the order should be based on. The Western countries are now increasingly referring to a 'rules-based order' instead of calling on everyone to adhere to international laws," Lavrov said in an interview for a documentary at a Russian broadcaster NTV.

The minister remarked that the international laws came about as the result of talks where consensus was reached, whereas "rules are being invented by the Westerners themselves."

"That is when it started, 20 years ago," the Russian foreign minister said.

Lavrov voiced the belief that NATO's actions in Yugoslavia had been motivated by Washington's desire to move closer to Russian borders, apart from other things.

"Washington had a temptation to place the global situation under its total control… and to solve all the emerging problems in such a way that could enable its domination in all the regions across the world. Among other things, the Yugoslavian story was certainly linked to the NATO desire to move to the east, closer to the borders of the Russian Federation… The further development of the events proves that it was in fact like this," the minister said.

He added that Russia had done everything it could to prevent a "catastrophe." According to Lavrov, Russia's initiative played a key role in formation of the Organization for Security and Co-operation in Europe mission monitoring the situation in the region, most importantly in Kosovo.

The Russian Foreign Minister also recalled that Russian and UK servicemen had prevented a "bad scenario" when they met in Yugoslavia. He praised the professionalism that the two countries' military forces had showcased back then.

Lavrov expressed regret that the West had not learned any lesson from the events in Yugoslavia and was continuing to carry out operations against sovereign states, which results in hundreds of thousands of casualties.

"The West has not in fact learned any lesson from it, and I doubt that it actually wanted to learn… Soon after 1999, a decision was made in 2003 to intervene into Iraq under the made-up pretext that Iraq allegedly had chemical and biological weapon," Lavrov added.

Yugoslavia a 'Warning' for Canada's Multicultural Mosaic - Journo
At the conference in Rambouillet, France, the United Kingdom and the United States, which are permanent members of the UN Security Council, were strongly in favor of using force against Yugoslavia and were supported by Canada and the Netherlands, the foreign minister said. Russia and China spoke out against this, and so did Argentina and Brazil.

NATO's 1999 strikes were carried out in Yugoslavia, made up of Serbia and Montenegro at the time. Albanian separatists from the Kosovo Liberation Army were engaged in an armed conflict with the Serbian security forces. NATO's bombing campaign, which took place between March 24 and June 10 in 1999, was not approved by the UN Security Council.

According to Serbian authorities, about 2,500 people died, while some 12,500 were injured.

000000
Popular comments
By destroying Yugoslavia the Anglo-American Empire renewed its historical posture of seeing Russia and Slavic values as an enemy-force. The imperial intent is not merely to prevent Russia becoming a world-power but to dismember Russia into geographical segments. Russia today confronts the most ruthless and determined aggressor in its history. the Anglo-American need to make Russia an enemy w