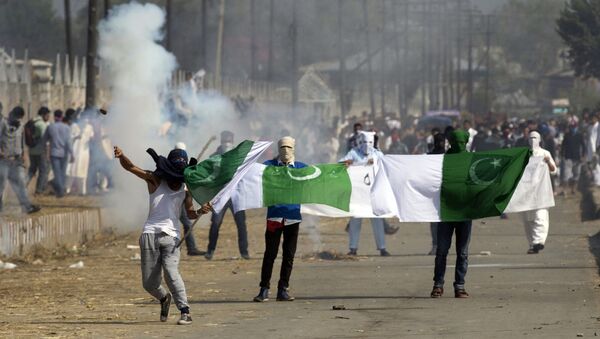 NEW DELHI (Sputnik) - India has decided not to send any representatives to the Pakistan Day reception in New Delhi, organized by the Pakistani diplomatic mission, because Islamabad invited Kashmiri militants to attend the event as well, a spokesman for the Indian Foreign Ministry, Raveesh Kumar, said.

Islamabad's invitation to Friday's event was extended to the All Parties Hurriyat Conference (APHC), formed in 1993 by over two dozen political, social and religious organizations in India to contest New Delhi's control over the northern state of Jammu and Kashmir — the Indian part of the disputed Kashmir region.

Protesters Throng Pakistan Embassy in Delhi Seeking Revenge for Pulwama Bombing
Indian representatives reportedly attended such receptions over the past few years despite the fact that APHC leaders were invited on each and every occasion.

However, relations between New Delhi and Islamabad, which have been traditionally tense because of the Kashmir territorial dispute, soured in February when India carried out an airstrike against what it claimed to be a camp of the Jaish-e-Mohammed militant group in the Pakistani-controlled part of Kashmir, in retaliation for the deadly terrorist attack on an Indian paramilitary convoy on February 14.

New Delhi and Islamabad have been engaged in a decades-long conflict over Kashmir, also contested by China. Since the 1940s, Pakistan and India have fought three wars over the region.

The Pakistan Day commemorates the adoption of the Lahore Resolution on March 23, 1940, which called for the establishment of independent states for Muslim-majority northwestern and eastern parts of then-UK-controlled India, and the adoption of the first Pakistani constitution in 1956.