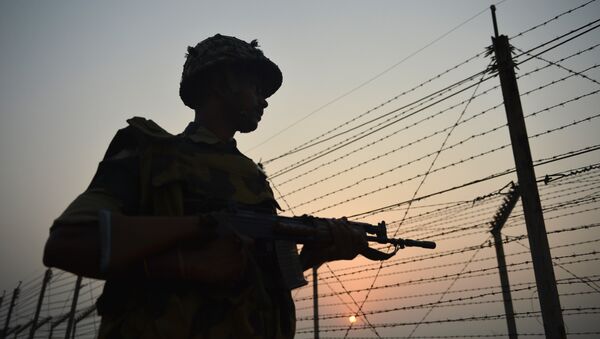 Local sources confirmed to Sputnik that heavy aerial activities, in addition to the firing of artillery, mortar and machine guns, are taking place from both sides of the Indo-Pak border.

New Delhi (Sputnik): A day after Pakistani troops killed one Indian soldier, heavy shelling and firing have been reported at multiple locations including the Pallanwala, Sunderbani, Nowshera Poonch and Mendhar sectors of the Line of Control (de-facto border) on Friday.

On Thursday, a soldier of the Indian Army was killed as Pakistani troops shelled forward areas and Indian posts with artillery and mortar bombs in Jammu and Kashmir's Rajouri district. Two other soldiers who were injured in the Pallanwala sector were admitted to hospital, according to a defence official. In retaliation, the Indian Army has so far gunned down 12 Pakistani soldiers, including two officers, India's Republic TV channel reported.

Four Gunfights Erupt in last 24 Hours in Jammu and Kashmir, 4 Terrorists Killed
The Pakistani side has not issued a statement regarding the loss of soldiers. India has lost at least three military personnel in the cross-border clashes over the past four days.

Earlier on Wednesday, The English daily Economic Times reported that the Indian Air Force sought additional ammunition, including air to air missiles, to counter Pakistan's build-up of its F-16 fleet along the border.

Hostilities between Indian and Pakistani forces escalated after at least 40 Indian soldiers were killed when an explosive-laden car rammed into a convoy of vehicles carrying Indian soldiers on 14 February in Pulwama in India-administered Kashmir, with New Delhi accusing Islamabad of shielding the terrorist group behind the attack.