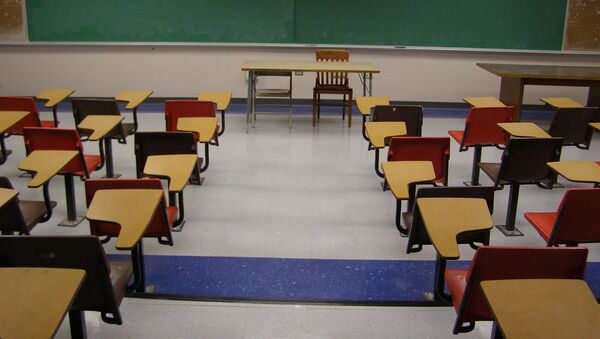 Charlottesville, Virginia, the site of a deadly white supremacist rally just two years ago, is again facing the possibility of racist violence: for the second day in a row, local schools have been closed due to a threat of "ethnic cleansing" and other racially motivated crimes at the city's high schools.

All Charlottesville public schools were closed on Thursday after a screenshot was posted to social media forum Reddit Wednesday threatening an "ethnic cleansing" in the form of a school shooting targeting non-white students — described using racial slurs — at Charlottesville High School. The post, which appeared to be from fellow forum 4chan's political discussion board, Splinter News reports, told white students to stay home.

The Charlottesville City school system sent a message to families in its school system on Thursday evening saying the decision to close for a second day had been made based on "extensive conversations" with law enforcement. The message, shared on the school system's Facebook page, said, "We would like to acknowledge and condemn the fact that this threat was racially charged. We do not tolerate hate or racism. The entire staff and School Board stand in solidarity with our students of color — and with people who have been singled out for reasons such as religion or ethnicity or sexual identity in other vile threats made across the country or around the world. We are in this together, and a threat against one is a threat against all."

Charlottesville daily newspaper The Daily Progress reported late Thursday night that all public schools would be closed for a second day after a similar threat was made regarding another nearby school. Albemarle High School Superintendent Matt Haas said Thursday that a threat to his school, which is just outside the city of Charlottesville in Albemarle County, had been posted on social media, though he also said there was no evidence linking the threat to his school to the previous threat to Charlottesville High School. Local NBC affiliate NBC 29 reported Friday morning that a teenager had been taken into custody over the threat to Albemarle; this teenager, about whom no details have been released, was taken into custody hours before the 17-year-old linked to the Charlottesville High School threat was arrested.

Albemarle County schools opened one hour late on Friday due to weather concerns, but the county has increased police presence around the schools.

Charlottesville Police Chief RaShall Brackney said Thursday afternoon that her department was trying to identify the source of the original threat and putting together search warrants, according to The Daily Progress, and that she expected the web forums to cooperate with law enforcement.

Charlottesville, with a population of nearly 49,000, has more than 4,300 students enrolled in its kindergarten through high school public school system. Its student body is nearly 60 percent non-white, according to statistics presented by the school system.

In August 2017, a variety of neo-Nazi and white supremacist organizations organized two days of protest in Charlottesville, dubbed the "Unite the Right" rally. When met by masses of counterprotesters, violent clashes broke out, with Unite the Right demonstrators beating a black man in a parking garage and, in the most infamous incident that day, deliberately driving at speed into a crowd of counterprotesters, killing 32-year-old Heather Heyer and injuring 19 others. Two Virginia state troopers also died as a result of the protests when the helicopter they were using to monitor events crashed.