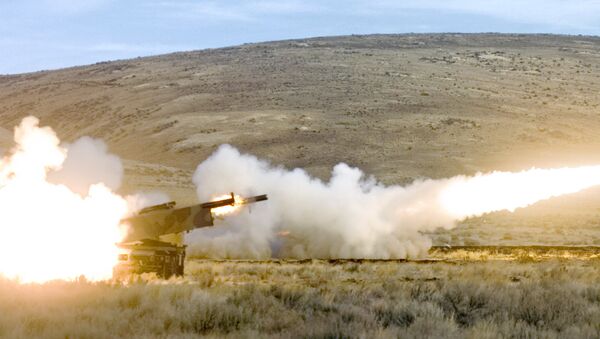 Just weeks after the US unilaterally terminated its Intermediate-Range Nuclear Forces (INF) Treaty with Russia, but promised not to develop new weapons that had been banned by the treaty, the Pentagon has proposed in its 2020 budget several new missile programs.

On February 2, 2019, US President Donald Trump formally suspended Washington's compliance with the treaty, penned by US and Soviet leaders in 1987, and Russia followed suit. The treaty banned land-based missiles with ranges of 310 to 620 miles and 620 to 3,420 miles, although it didn't cover air-launched or sea-launched missiles.

On February 7, US Undersecretary of Defense for Policy John Rood said the US intended to continue respecting the range limits set by the INF Treaty, which Trump suspended because he believed Moscow to have violated it with the 9M729 missile deployed on Russia's Iskander system, and the US had no plans to create or deploy an intermediate-range weapons platform.

"We don't have an intermediate range system or something like that that we would, that we're talking about deploying at this time. We're going to look at our options in this regard," Rood said, Sputnik reported.

However, just a month later, the US Army released Fiscal Year 2020 budget requests that include several missile development programs, including for weapons that would have been banned by the INF.

Moreover, the US announced last week its intention to test two weapons banned by the INF Treaty as soon as it formally expires in August, six months after the February announcement of its termination. One is a cruise missile with a range of roughly 600 miles, which the Pentagon will test in August, and the other is an intermediate-range ballistic missile with a range of between 1,800 and 2,500 miles, which will be fired off in November, Sputnik reported.

Credit for Cruise Missiles? Pentagon Offers Partners Loans to Buy from US

The cruise missile is reported to basically be "a Tomahawk… on a truck," according to the Washington Post, citing a DoD official. However, the ballistic missile is one much longer in development.

"It's a brand-new missile," the DoD official said. "Think Pershing II. It's a missile of that class."

This comment should give every observer pause. It was the deployment of Pershing II missiles to Western Europe in 1983 that set off the sequence of events leading to the establishment of the INF Treaty in the first place. The Washington Post reported the year before that the missiles could traverse the 1,000-mile distance to Moscow in just six to eight minutes — not enough time for the USSR to make a proper judgment of the threat posed by objects detected on radar.

Indeed, in September 1983, a rare sunlight reflection off a satellite caused serious alarm in Moscow, since it happened during NATO's Able Archer drills in Germany, which were so realistically carried out that Soviet commanders suspected them to be preparations for a real attack on the Warsaw Pact alliance. The Soviet Air Defense Forces commander who detected the phantom missiles, Stanislav Petrov, nearly sounded the alarm that would have begun a reciprocal nuclear launch by the USSR, only deciding against it at the last moment since he suspected it to be a computer error.

Inside Defense reports that the US Army wants to spend $900 million over the next five budget cycles to develop a "mobile medium-range missile" (MMRM) that will use "non-traditional" acquisition rules to address an "extremely high-risk capability gap."

Defense News notes the MMRM's development is "in response to a need in the Indo-Pacific area of operations to address a medium-range (1,000-kilometer) gap in capability there," which is roughly 620 miles.

Details at this point are slim, but the budget documents expect the weapon to be ready by the end of FY 2024.

The Pentagon will also be spending roughly $1.2 billion over the next five years on a super-fast "hypersonic" missile, which travels faster than Mach 5 and which the US is racing to complete and deploy before Russia or China can put like weapons in the field. However, Russia has already developed the Avangard hypersonic glide vehicle, which is technically a spacecraft, and the Tsirkon hypersonic cruise missile, which the Kremlin unveiled last month.

Defense News says the Army's number one priority is the Long-Range Precision Fires (LRPF) missile and has been since 2017. Again, the paucity of details makes precise analysis difficult, but the US Army's miniscule info sheet on the LRPF notes that the weapon will be deployable from either the MLRS or HIMARS mobile rocket launch systems and will have "deep strike capability" that can "reach farther than 300 kilometers (186 miles)."

Last October, Sputnik reported that the Precision Strike Munition (PrSM), closely related to the LRPF, will have a range of 310 miles, which brings it right up against the lower bounds that had been set by the INF. Defense News noted at the time that the Army bumped the expected delivery date of PrSM up from FY 2027 to 2023.