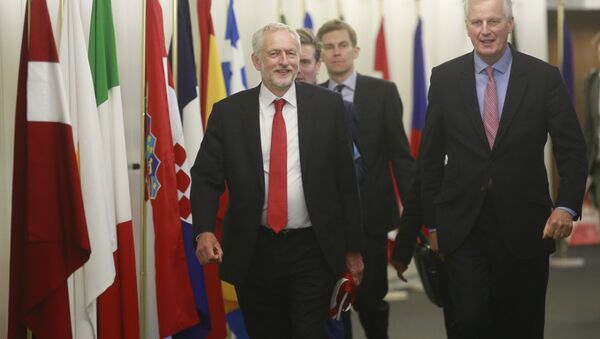 © AP Photo / Olivier Hoslet
Subscribe
At the 11th hour, the Labour leader is to go further than making his case for avoiding a no-deal situation at all costs, he will in fact try to convince the Prime Minister of his much touted softer model for Brexit

UK Labour Party leader, Jeremy Corbyn, is due to meet Prime Minister Theresa May next week in an effort to convince her of the case for a softer Brexit, he has told the Mirror in an interview.

Mr Corbyn said that he will meet Miss May on Monday, March 25 — just before she is due to put her much maligned Brexit agreement to a parliamentary vote for the third time — and that his primary objective is to convince the Prime Minister into abandoning a no-deal outcome.

Workers and businesses are rightly calling for Theresa May to change her approach to Brexit.

Labour's alternative plan would protect jobs, the economy and living standards. It could win the support of parliament and the EU, and bring the country together.https://t.co/vO4gIQnEWg

Surprisingly, Mr Corbyn has said that he will throw the Labour party's full support behind Miss May if she agrees to the pursuit of a softer Brexit alternative, that would include Britain remaining in a customs union with the EU.

"We're the responsible party here. We're not running down the clock, we're looking for solutions," Mr Corbyn told the Mirror.

"If she could say she's prepared to understand what we're saying, the points we're making about the future — customs union, dynamic relationship with Europe — then we will be able to talk to her about that. She's got to move forward on how things can change," he added.

Expressing his own concerns and misgivings about a no-deal Brexit, Mr Corbyn told the Mirror that, "the dangers of a chaotic exit are huge, on supplies, investment, jobs and everything else."

"It's a very real threat obviously and it's made worse by the PM prevaricating. I'm very clear where the responsibilities lies for where we've got to. I feel very, very worried indeed," he added.

Yet, even Mr Corbyn's appeals for a softer Brexit are unable to placate the most ardent Remainers.

Please, Jeremy, put your personal dogma to one side and do what the people of the U.K. and the members of Labour want you to do: campaign for a People’s Vote including an option to Remain, or revocation of Article 50. If you can’t do that then resign. I voted for you twice.

We're asking you to too.

People's vote or revoke, this is it madness and you're complicit.

How many hours did I waste defending you?

As I discussed with my local Labour candidate the other day, who totally agreed. So I seconded his application.

WE
DON'T
WANT
YOUR
ALTERNATIVE
PLAN!#RevokeArticle50

Despite Mr Corbyn's regular talking up of a softer Brexit alternative, it is not entirely clear that such a policy change would be able to survive the test of parliamentary consensus. Other opposition parties, such as the Liberal Democrats and the Scottish National Party, are staunchly opposed to Brexit of any variation and have long called for a second referendum, often billed as a ‘people's vote.'