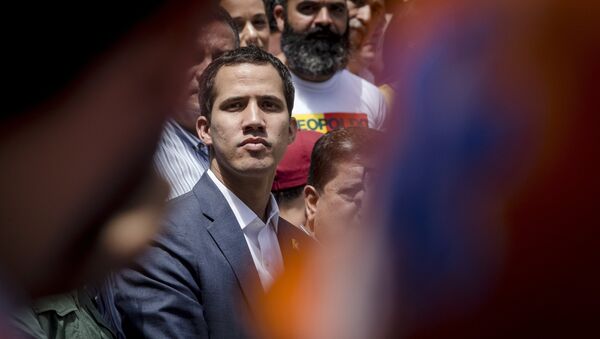 Earlier in the day, a source in the Venezuelan police in Caracas told Russian news agency RIA Novosti that Venezuela's intelligence service had detained two associates of the country's opposition leader, Juan Guaido.

Venezuelan Minister of Interior Nestor Reverol, during an appearance on state television, said that Roberto Marrero, an aide to the country's self-declared "interim president" Juan Guaido, was part of a terrorist cell that planned attacks in the country and was linked with foreign mercenaries. The minister revealed an image of two rifles as evidence against the aide, who had been detained in an early-morning raid.

"The investigation carried out by intelligence agencies together with the office of the prosecutor general … led to the detention of Roberto Eugenio Marrero, 49, who is a lawyer and is directly responsible for the organization of criminal groups. A batch of weapons and cash money in foreign currency were seized from him," Reverol said in an address aired by local TV broadcasters.

Bolton on Trump’s 'All Options on Table' in Venezuela Quote: 'He’s Very Serious'
By this detention, the authorities had disrupted the activities of a terror cell that had planned to stage a number of attacks, the interior minister added. Reverol also suggested that the cell could have hired mercenaries from Colombia or Central America to attempt to assassinate Venezuelan political leaders, military personnel, judges, as well as to carry out "acts of sabotage" toward public services in order to sow chaos in the Venezuelan society.

A police source had previously told RIA Novosti that Marrero was one of two of Guaido's aides detained that day, and that one of them was found to have rifles and a grenade in their possession.

"Early this morning, two of the closest associates of Venezuelan National Assembly leader Juan Guaido — Roberto Marrero and Sergio Vergara — were detained at their homes. The detention was carried out in the El Cafetal neighbourhood of the Baruta municipality. Two rifles and a grenade were found in Marrero's house," the source said. The source said that Vergara had been released and Marrero remained in custody.

Washington was quick to respond to the news, with US National Security Adviser John Bolton calling the arrest a "big mistake" and threatening to respond harshly.

Since January, Venezuela has been in a political crisis since January 5, when Guaido was elected the head of the opposition-controlled National Assembly, which all other government branches have been refusing to recognize since 2016.

Toughest US Sanctions Against Venezuela 'Yet to Come' - Bolton
On January 23, two days after the Venezuelan Supreme Court annulled his election, Guaido declared himself the country's "interim president." Venezuelan President Nicolas Maduro, who was sworn in for his second presidential term on January 10 after winning the May election, which part of the opposition boycotted, qualified Guaido's move as an attempt to stage a coup orchestrated by Washington.