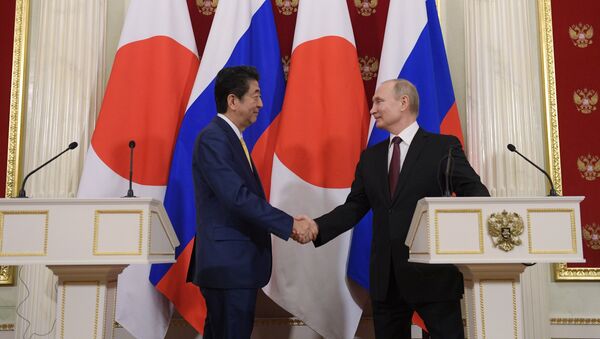 MOSCOW (Sputnik) - Russia and Japan still have significant differences in their approaches to the peace treaty issue, but Moscow is ready for further dialogue with Tokyo despite existing disputes, Russian Deputy Foreign Minister Igor Morgulov said Thursday during consultations with his Japanese counterpart, Takeo Mori.

"I have to note that we are still at the very beginning of the negotiating process and our approaches still diverge significantly", Morgulov said, adding that the two states should continue the dialogue as had been agreed by Russian President Vladimir Putin and Japanese Prime Minister Shinzo Abe.

Mori, for his part, reiterated Tokyo's interest in developing a partnership with Moscow and signing a peace treaty.

"A true partnership that would contribute to the stability and prosperity of the Pacific Rim corresponds to the strategic interests of Tokyo and Moscow. [This partnership] requires the resolution of difficult issues and signing of a peace treaty… In order to achieve progress in negotiations, I intend to work actively with you as a negotiator", Mori stated.

Russian-Japanese consultations on a peace treaty are being held in Moscow on Thursday at the level of deputy foreign ministers.

Japan to Host US Missiles Despite Russian Claim That They Violate the INF Treaty
During peace treaty talks with his Japanese counterpart in January, Russian Foreign Minister Sergei Lavrov stressed that the sides had confirmed their willingness to work on the basis of the 1956 declaration, "which means, first of all, the inalterability of… Japan’s complete recognition of… Russia's sovereignty over all the islands of the South Kuril ridge".

The ministers also held talks later in February, where Lavrov reiterated there is no alternative to the recognition of Russian sovereignty over the Kuril Islands by Tokyo.

READ MORE: Japanese-Russian Peace Treaty Should Not Be Left for Next Generation — Abe

Relations between Moscow and Tokyo have long been strained by the fact that the two nations never signed a peace treaty following the end of World War II. The agreement was never reached due to a heated dispute over a group of islands — Iturup, Kunashir, Shikotan, and Habomai — that Russia has sovereignty over. They are also claimed by Tokyo.