Opposition Politician Calls on Algerians to Come and Set Him Free 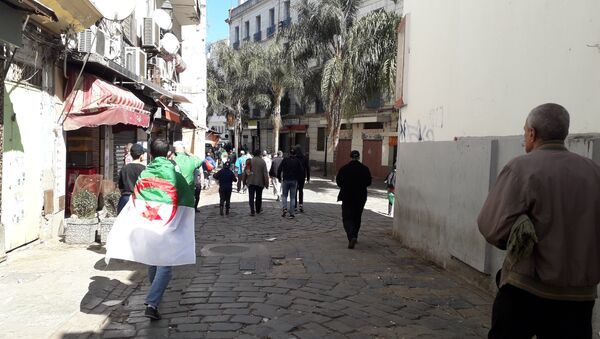 Sputnik spoke with Algerian France-born billionaire and opposition politician Rachid Nekkaz, who claims that he has been placed under house arrest 250 km from Algeria's capital.

Rachid Nekkaz renounced his French citizenship in 2013, and is known for spending thousands of euros to pay for Muslim women’s fines for violating the burqa ban in France, Belgium, and Austria is actively supported by opposition-minded youth, but so far, despite his political ambitions, has been hindered from running for public office due to an existing ten-year residency requirement.

On the eve of the protest demonstrations scheduled for 22 March, Rachid Nekkaz, an Algerian businessman and leader of the Youth and Change Movement (fr. Mouvement pour la Jeunesse et le Changement, MJC — ed. note Sputnik), called on Algerians to block several oil refineries. He advised protesters to take dates with them, as they are considered a symbol of peace. According to Nekkaz, in order to prevent civil unrest, it is necessary to form a "government of national unity".

Sputnik: You are saying that the authorities illegally placed you under house arrest. How did this happen and in what conditions do you live now? Can you move freely?

Algeria's Interim President Promises Free Presidential Election - Reports
Rachid Nekkaz: When I flew to Algeria on 15 March at 6:45 a.m. to participate in the protest against Abdelaziz Bouteflika, I was arrested and detained for 24 hours. Then 70 police officers escorted me to the village where I live, 250 kilometres from the capital, and I was illegally placed under house arrest. I am strictly forbidden from going anywhere. At the moment, there are 15 policemen on duty at my house.

Sputnik: You are claiming that the authorities took away your passport…

Rachid Nekkaz: When I arrived, my Algerian passport was taken from me at the airport so that I could not leave the country. The government did not like the fact that Algerians in Paris were carrying me shoulder-high, not only in the Saint-Denis commune but also at the Place de la République square. These photos and videos spread all over the world, showing Algerian youth carrying me in their arms, not only in Algeria but also abroad.

Sputnik: How will you go to Algiers for the next rally?

Rachid Nekkaz: I called on the Algerians to come to set me free on 22 March at 9:00 so that I could participate in demonstrations and march to the presidential palace of El Mouradia. I want to see how the authorities will react to the arrival of the Algerians in my village.

Sputnik: Your Facebook page with 1,800,000 followers is unavailable. What happened?

Rachid Nekkaz: Let me remind you that my Facebook page was already hacked once and blocked for three days in December 2017. We were able to find out who did it. It was a man who came from Tlemcen, the city where President Bouteflika's father was born. The authorities did not allow me to file a lawsuit against this person but we managed to find an IP address. This time, on 17 March, my page was deleted and since that day I have had no access to it. I applied to the Facebook regional headquarters in Dubai and to a branch in California but I have yet to receive a reply.

Sputnik: President Bouteflika announced the convening of a National Conference in the near future, the participants of which should prepare a transitional process. How do you assess this statement?

Rachid Nekkaz: Since 2015, I have been telling the Algerian media the same thing: "President Bouteflika is a political corpse". He himself has not addressed the Algerian people since 2012. Algerian authorities masterfully manipulate public opinion both domestically and abroad. For 7 years they have ruled, limiting themselves to the adoption of regulations. It seems as though we've returned we've returned to the Middle Ages. They are no longer trustworthy. Any statement on behalf of the president is not credible. People who revolve around him spread completely false information.

Algeria to Take Charge of Destiny ‘Without Same Mistakes as Neighbours' - Journo
Sputnik: You state that you are offering a way out to the current authorities…

Rachid Nekkaz: It is necessary to restore constitutional legitimacy and to hold the presidential elections on 18 April, as provided. If we do not make the effort to do this, new civil unrest, like in the 1990s, might start in Algeria. I think the Algerian authorities are very afraid of prosecution. That is why I suggest — if we are victorious — adopting a law on tax and financial amnesty in order to provide the current authorities with a way out, so that they can quit peacefully and with dignity.

Sputnik: You called on the people to block the oil refineries on 22 March and "to go have some tea in the presidential palace of El Mouradia". Some Internet users wrote that you are a "dangerous person". What do you say to that?

Rachid Nekkaz: Whatever actions I have taken in Algeria or abroad since 2013, I have always had peaceful intentions. I walked hundreds of kilometres from Tizi Ouzou to the Algerian desert to protest against the shale gas. I was welcomed by thousands of residents. I have always acted peacefully and do not intend to change my philosophy or strategy. I called on the Algerian people to approach the El Mouradia Palace and bring with them dates, a symbol of peace in Algeria, thus sending a message of peace not only to the Algerian authorities but also to the international community. As for the blocking of oil refineries, this is an appeal to the international community to stop supporting the Algerian dictatorship.

Sputnik: How exactly are you going to form a government of national unity?

Rachid Nekkaz: I returned to Algeria and was preparing to meet leaders of the opposition parties but I was arrested. I wanted to discuss with them the formation of a national unity government. It must be admitted that everything was done in order to prevent my communication with these representatives of the opposition. The dictatorship wants to prevent me from forming a government of national unity. However, I hope that in the coming days all this will become possible. But first of all, I need to be able to move around again. Inshallah!