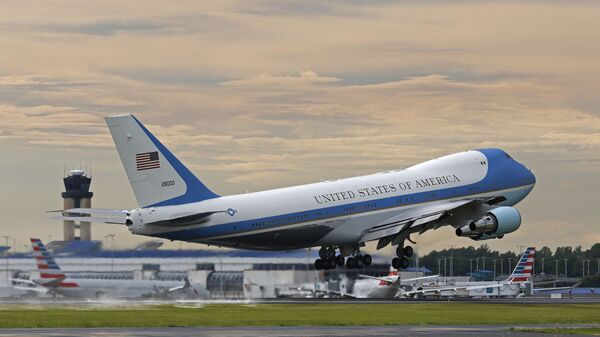 The decision was made in the aftermath of the Ethiopian Airlines Boeing 737 crash earlier this month that killed an estimated 149 passengers and eight crew members on board.

In an exclusive comment to CNN, US Air Force Chief of Staff Gen. David Goldfein revealed that he had ordered a review of the training procedures for military pilots of large cargo and transport planes, including the president’s Air Force One.

Goldfein explained that he sought to make sure that certain pilots were fully prepared to handle emergency situations as a precaution.

Canadian, European Regulators to Hold Independent Reviews of Boeing 737 MAX
The general’s order covers such planes as the C-17 and KC-46, both manufactured by Boeing, although there is no indication of problems with either model, according to officials.

The decision was made amid concerns about whether commercial pilots have had proper training on Boeing 737 Max 8 aircraft, which have been grounded worldwide in wake of the Ethiopian Airlines crash on 10 March, and know what to do if their automated systems fail.

The media outlet referred to Air Force officials who insisted that, to their mind, none of their aircraft have had issues similar to those the Boeing 737 Max 8 had.

One official pointed out that Air Force automated pilot systems were different to those on the Boeing plane model that suffered two crashes in six months: in October 2018, Indonesia’s Lion Air 737 MAX 8 crashed in the Java Sea with 189 people on board.

Pilots of Lion Air Boeing 737 MAX Struggled to Find Fix Before Crash - Reports
US President Donald Trump has yet to comment on the CNN report, but he has already ordered Boeing 737 MAX jets to be grounded until more information is gathered about the Ethiopian Airlines crash.

The development comes after a Boeing 737 MAX 8 aircraft crashed near Ethiopia’s Addis Ababa, killing all 157 passengers and crew members on board.

The fatal accident prompted a vast number of countries, including the US, China, the EU, and Russia, to either close their airspace to the exact model or suspend its flights, with the Federal Aviation Administration (FAA) becoming the last authority to do so.