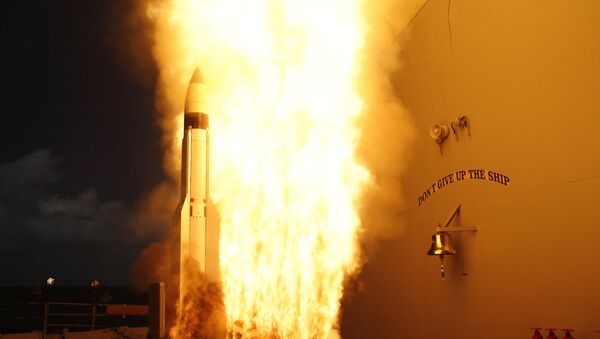 "In fact, they [the United States] are just trying to find a pretext [to justify] its aspirations to establish unilateral military supremacy and to carry out research and develop advanced weapons", Geng said at a briefing, commenting on US assistant secretary of state Yleem Poblete's claim about China developing ground-based missiles able to target low-Earth-orbit satellites.

He slammed the United States for its baseless accusations against Russia and China.

"I would like to remind you that this is the United States that turns space into a new battlefield. It has already set up the headquarters of the Space Force and is now in the process of the Space Force creation. It also plans to station laser weapons in space. You don't even have to point out who exacerbates the risk of space militarisation and weaponisation and jeopardises space security", Geng added.

The spokesman also said that China had never participated in an arms race in space and had no intention to do so.

INF-Banned Missiles: US Stirs Up Tensions to Push Russia, China to Wall – Lawyer
The statement comes just several days after US Acting Defense Secretary Patrick Shanah announced that Washington created a new Space Development Agency (SDA) in order to "define and monitor" future threat-driven space architecture and accelerate development while reducing bureaucratic overlap and inefficiency. Eventually, the SDA would be transferred to the proposed US Space Force, which must be approved by Congress.
Newsfeed
0
Access to the chat has been blocked for violating the rules . You will be able to participate again through:∞. If you do not agree with the blocking, please use the feedback form
The discussion is closed. You can participate in the discussion within 24 hours after the publication of the article.
To participate in the discussion
log in or register
loader
Chats
Заголовок открываемого материала