US Cop Recorded Detainee’s Genitals, Demanded Another ‘Twerk’ for Camera 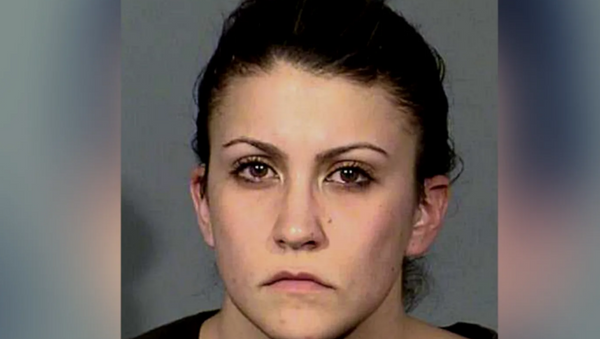 A Las Vegas Metropolitan Police officer will face a hearing in June for using “criminal justice information systems” to help her friends and family and for recording videos of people who were "in her control as a police officer” in order to mock them, according to the police department.

According to investigators, 29-year-old Rachel Sorkow conducted criminal history inquiries for friends and family at least 19 different times. Officers also uncovered footage on her cell phone of her harassing and mocking people under her control, according to the Las Vegas Sun. She was charged with five felony counts of misconduct by a police officer and two gross misdemeanor counts for recording someone's genitals and for indecent exposure, according to a March 12 police press release.

In one video, a presumably mentally ill person wearing a dress is standing next to Sorkow's car.

"I just want to see you dougie and twerk and then we're good," Sorkow is heard saying in the video. She eggs the person on as she films, cajoling "come on," until the individual begins to dance while she raps.

According to officers, Sorkow shared the footage with at least three people, one of whom is another Las Vegas Metropolitan officer. In their text exchange, the unidentified officer tells Sarkow at a later date that he ran into the same individual.

"Bahahaha ran into your boo lol shouted you out hah," the text reads, to which Sarkow responded, "I have fun with these [expletive] hahaha," before using a transphobic epithet.

In another instance, Sarkow mocks a woman who made a domestic violence call. In the footage, she asks the unidentified woman if she would consider being on the reality TV show "My 600-Pound Life," which chronicles the journeys of morbidly obese people as they try to save their own lives. Sarkow shared the video with at least eight people, according to police.

"Partners with the community, feeding criminals gummy bears," Sorkow is heard saying in the video.

Another video shows Sarkow responding to a call regarding a man exposing his genitals in front of a business. At one point in the video, the handcuffed man kicks the patrol cruiser, according to investigators.

"Do it again," Sorkow is heard telling the man. When he raises his right leg, his penis is exposed through a rip in his pants. Sorkow laughs and zooms the camera into his genital area. At some point, she calls the man a racial epithet, according to officials.

Sorkow was relieved of duty with pay on December 4, 2018. Her preliminary hearing is scheduled for June 2019.

According to Sorkow's attorney, Tony Sgro, Sorkow will not plead not guilty to the charges against her.

"We intend to vigorously defend the allegations and look forward to vetting this out in the courtroom," he told the Las Vegas Review-Journal. "She took her job as a police officer seriously, and it's important to not make any judgments until people have heard both sides," Sgro said.

The Las Vegas Metropolitan Police Department did not immediately respond to Sputnik's request for comment.