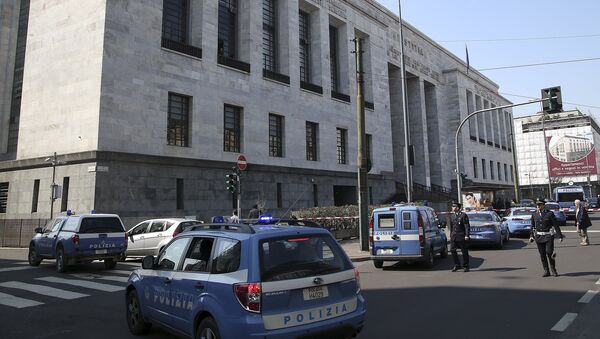 Local police have already arrested the bus driver responsible for the arson. All passengers made it out without injuries, but several of them have been sent to hospital due to inhaling smoke from the fire.

An Italian bus driver of Senegalese origin attempted to set a bus with 51 people, mostly children and their parents, on fire in Milan on 20 March, RaiNews24 reported. The man changed the bus's course, which was taking school children home in Crema after outdoor activities, then announced that he wanted to kill himself to "stop deaths in the Mediterranean Sea" and proceeded to threaten passengers with a knife, the online media outlet reported.

One of the children reportedly managed to call their parents, who in turn called emergency services and the police. The latter set up roadblocks, which the driver tried to ram, but eventually lost control of the bus and had to stop, according to RaiNews24. After this, the bus driver allegedly poured gasoline inside the bus and ignited it. However, police managed to rescue the passengers through the windows and the back door.

The 47-year-old bus driver, Ousseynou Sy, who already had a criminal record, has been arrested. According to the medics cited by RaiNews24, none of the passengers sustained injuries, but 12 children and 2 adults were taken to the hospital with symptoms of smoke poisoning.

Although Ousseynou Sy hasn't fully clarified his statements about "deaths in the Mediterranean Sea", he was apparently referring to the multitude of cases of migrants from Africa and the Middle East drowning while trying to illegally reach Europe by boat.